Remarkable advances have occurred in noninvasive imaging evaluation of pediatric cardiothoracic vascular disorders. One such technologic advancement is multidetector array computed tomography (MDCT). MDCT, using the computed tomography angiographic (CTA) technique, has become a primary imaging consideration for structural cardiovascular evaluation beginning as early as the newborn period.1–5 Attention to technique is fundamental for pediatric CTA.6–8 Without optimal or at least sufficient technical performance, diagnostic capabilities may be limited. This technical aspect (in addition to the diagnostic interpretation and communication of results) is the responsibility of the imaging expert. Therefore the objective of this chapter is to provide technical guidelines for performing pediatric thoracic CTA. The clinical examples provided illustrate these technical considerations.

Pediatric CTA offers several advantages over other contemporary imaging modalities, including echocardiography, magnetic resonance imaging (MRI), and conventional cardiac catheterization and angiography. First, computed tomography (CT) provides the best global assessment of the lungs and airways, as well as other regional structures, in both congenital9 and acquired vascular disorders (e-Figs. 66-1 and 66-2). 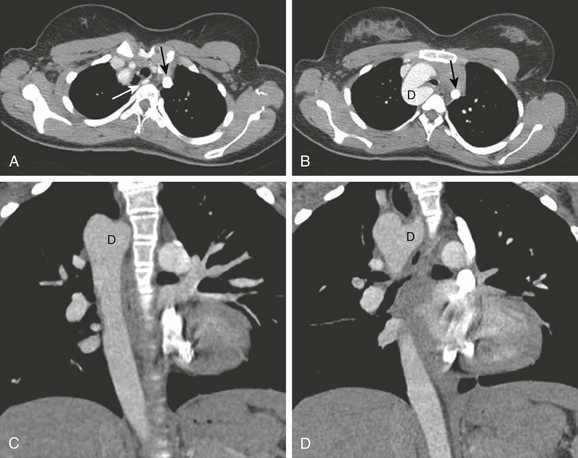 e-Figure 66-2 An 11-year-old girl with chronic cough on exertion due to a right aortic arch with an aberrant left subclavian artery.
A, Axial intravenous contrast-enhanced image from a computed tomography angiography scan at the level of the thoracic inlet shows the aberrant course of the left subclavian artery (white arrow). B, This is associated with an aortic diverticulum (D), resulting in airway narrowing. Note the left-sided superior vena cava (SVC) (black arrow in A and B). Coronal reformations (C, D) also show a right-sided arch and descending aorta, as well as a left-sided SVC seen adjacent to the left pulmonary artery in D. E) and lateral (F) projections shows mild displacement and effacement (arrow in F). G, Volume rendering shows the subclavian artery (large arrow) and left SVC (small arrow). Ao, Aorta. (From Frush DP. Technique of pediatric thoracic CT angiography, Radiol Clin North Am 43:419-433, 2005. Reprinted with permission.)

Congenital cardiovascular disorders may affect the respiratory system by causing tracheal compression or deviation (e.g., from vascular rings or pulmonary slings) with resulting obstructive effects on the lungs, or by causing air trapping at the parenchymal level, such as diffuse hypoinflation or mosaicism as a result of cardiogenic pulmonary edema. In addition, CT can suggest or demonstrate associated primary abnormalities of the respiratory system, such as pulmonary hypoplasia or tracheomalacia. Although conventional angiography could supply information on the lungs and airway, it is focused primarily on the evaluation of the vascular intraluminal anatomy. In addition, sedation is needed less frequently in younger children for CT than for magnetic resonance (MR) vascular imaging, echocardiography, or conventional angiography.

With newer technology, such as volume MDCT (e.g., 320 detector array single rotation acquisition)10 or dual-source MDCT (Fig. 66-3),11 a complete examination of the entire chest of an infant can be completed in less than 1 second. With echocardiography, MR vascular imaging, or angiography, imaging times typically exceed 20 minutes and may occur over hours. A reduced examination time means that CT is better tolerated by infants, children, and patients in the intensive care unit who may have a limited ability to hold still or require the examination to be performed quickly for other reasons. The technical quality, including display, also is more consistent with CT compared with echocardiography, which is a more operator-dependent examination, and compared with MR evaluation, where operators select parameters and sequences that may give a different study quality from one examination to the next. CT also allows better patient monitoring than does MRI. In addition, many of the contraindications of MRI (e.g., pacemakers, internal support apparatus, and some surgical devices) are not contraindications with CTA and produce less image artifact than with MR angiography. Unlike with conventional angiography, the multiplanar and three-dimensional capabilities of CTA provide for off-line review of information in virtually any plane. For conventional angiography, this feature is limited to the planes selected during a particular sequence, and for echocardiography, the examination planes or views recorded are the only information available for off-line evaluation. The cost of CT is comparable with that of Doppler echocardiography, in general is less than that of MR, and is much less than conventional angiography. 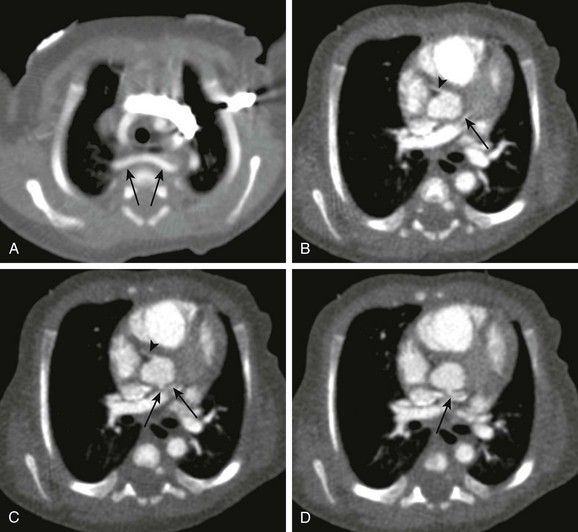 Figure 66-3 A newborn boy with labored stridor.
Aortic arch anatomy was incompletely assessed on echocardiography. Nongated dual-source cardiac computed tomographic angiography was performed using high-pitch 3.2, 80 kVp, 60 effective mA, and 6.0 mL of 300 mg/mL iodine yielding an estimated radiation dose of approximately 1.4 mSv. The scan was performed over about 0.6 seconds. A, An aberrant right subclavian artery (arrows) is seen to pass behind a normal caliber trachea. No cause for respiratory difficulty was identified. B to D, Note excellent depiction of small structures as a result of high-pitch scanning, demonstrating the normal origin of the right coronary artery (B and C) (arrowheads) and the relatively posterior origin and course of the left main coronary artery, probably still from the left coronary cusp in B to D (arrows).

CTA has some disadvantages. CTA involves the use of radiation, which is an issue with angiocardiography but not with MRI or echocardiography. CT radiation dosages depend on the technique used. In general, CTA can be performed with a dosage similar to or lower than that of a routine chest CT. CTA dose estimates in young children can be less than 1.0 mSv.12,13 With gated technology, employing prospective gating and newer volume scanning, doses also can be substantially lower than with older CT technology and retrospective gating.13–16 With rare exceptions, properly performed pediatric CTA results in a lower radiation dose than conventional diagnostic angiographic evaluation. Electrocardiographic-gated CTA usually involves a greater radiation dosage than limited diagnostic conventional angiography or a nongated CTA. Intravenous (IV) contrast material is required for CTA but also is required for conventional angiography and for MR angiography. The risk of major adverse effects (e.g., airway spasm and cardiovascular collapse) from iodinated IV contrast material is extremely small in children.17,18 Unlike with echocardiography, MRI, and conventional angiography, pediatric thoracic CTA typically is used for morphologic assessment, although cardiac function and other hemodynamic information can be obtained.19 CT for cardiovascular evaluation also is not portable.

Various factors must be taken into consideration in choosing an appropriate imaging algorithm. Individual expertise is a strong consideration, as is the availability of the modality desired. Personnel must be able to perform these examinations, and imaging experts, such as radiologists, may have preferences. Performing CTA on an MDCT device that offers less than 16 slice (e.g., a 4- and 8-slice MDCT device) is problematic, and image quality (both contrast enhancement and multiplanar reformations) is more limited. A CT scan that can be performed within the same day or relative quickly may be preferred compared with waiting several days for an MR evaluation. In general, echocardiography should be the first examination considered, with MR being second, unless contraindications are present.

The subject is an otherwise healthy, 4-week-old, 4.0-kg male infant with congenital stridor. Findings of an echocardiogram suggest the presence of a vascular ring (see Fig. 66-6).

1. Determine that computed tomographic angiography (CTA) is the appropriate examination. Echocardiography was inconclusive. Magnetic resonance would require sedation and a 2- to 3-week wait for a sedation slot. CTA had a 1-day turnaround.

2. Define the question to be answered. Aortic arch and airway. A high-detail examination (e.g., for small vessels) is not necessary. It is not necessary to image below the mid to lower thoracic aorta (thus the radiation dose can be lower).

3. Understand the anatomy. Aortic rings, including innominate compression; a pulmonary sling is not exhibited with true stridor.

4. Patient limitations. Essentially none. The patient will be fed immediately before the CTA but after the intravenous line is in place.

Onset of scanning: Determined with a test bolus of 0.6 mL contrast in a tuberculin syringe. Short extension tubing. Start monitoring images at 2-second intervals and begin push of the test bolus when the first monitoring image appears. Contrast reaches the right ventricle in 5 seconds and the left ventricle in 6 to 7 seconds. Add 2 seconds, so the scan onset will be 8 to 10 seconds after starting administration of contrast for the diagnostic study.