Congenital lesions of the neck consist of a variety of entities, some of which become apparent at birth or shortly thereafter, whereas others present clinically later in life. This chapter will focus on congenital lesions that can be recognized in the fetus or the newborn. Currently, many congenital cervical lesions may be diagnosed prenatally, making it essential for pediatric radiologists to be familiar with general patterns of these lesions in fetal imaging.

Other congenital lesions that cause symptoms only when enlarged or infected will be discussed elsewhere in the relevant chapters.

Presence of mass lesions in the fetal neck may considerably influence other fetal organs and organ systems because of the complex anatomy of the neck and the proximity of the lesion to vascular, upper gastrointestinal, and, especially, airway structures.

Conditions that may result in tracheolaryngeal obstruction and, thus, could be life threatening include extrinsic causes such as cervical teratomas, venolymphatic malformations, and vascular rings, and intrinsic causes such as congenital high airway obstruction syndrome and upper airway hemangiomas. Giant fetal neck masses may grow to obstruct the esophagus, thereby leading to an accumulation of amniotic fluid and polyhydramnios and increasing the risk of preterm labor.

Accurate depiction and distinction of these conditions with imaging facilitate prenatal counseling and delivery planning. In addition, some congenital cervical lesions may be associated with other serious anomalies and may be the first manifestation of a systemic disease or syndrome, potentially requiring further investigation.

Fetal neck lesions occasionally present a diagnostic challenge. Giant fetal neck masses may resemble each other, sharing many imaging features including cystic and solid components, increased vascularity, and foci of mineralization. The exact origin of a midline cervical cyst may be difficult to establish. For accurate diagnosis, it may be necessary to utilize complementary imaging modalities.

Imaging of the fetal neck is performed by ultrasonography and magnetic resonance imaging (MRI). Evaluation of the neonatal neck may be performed by ultrasonography, computed tomography (CT) with contrast, and MRI with and without contrast. Some indeterminate hypervascular lesions may rarely require evaluation with conventional angiography. Lateral radiography of the neck may still be used in emergent initial evaluation of upper airway pathology but is rarely of value in the workup of congenital lesions.

Ultrasonography is a noninvasive, real-time, high-resolution imaging modality that provides anatomic images supplemented by Doppler evaluation of blood flow. It is equally useful for primary obstetric imaging and for portable bedside evaluation of a neck mass in the restless child.

Prenatal ultrasonography includes routine evaluation of normal anatomic structures of the head, face, and neck, as well as upper airway patency and pattern of swallowing. Airway patency may be difficult to confirm with ultrasonography, hence ancillary signs of airway and upper gastrointestinal tract compromise, such as a small stomach or polyhydramnios, should be routinely searched for. Ultrasonography demonstrates morphologic characteristics of cervical pathology, specifically the cystic or solid nature of any lesion and the presence or absence of fat and calcifications.

Color Doppler provides valuable characterization of a lesion’s vascularity and blood supply, detects possible arteriovenous shunting, and depicts the major neck vessels. Three-dimensional reconstruction clearly depicts the relationship of cervical lesions with adjacent facial and skull base structures (e-Fig. 14-1). Potential shortcomings of ultrasonography involve cases with poor acoustic windows because of an anterior position of the placenta, maternal obesity or polyhydramnios, and abnormal fetal position with unusual flexion and extension of the fetal neck. 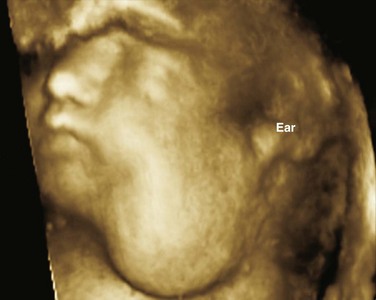 Ultrasonography imaging of congenital neck lesions in young children is performed with high-resolution (3 or 5, up to 12 megahertz [MHz]) transducers. The examination is fast and usually requires no sedation. Reliable distinction of the cystic or solid nature of the lesion may be sufficient for diagnosis in some instances; however, assessment of surrounding tissue invasion may be suboptimal.

CT with contrast administration is a valuable tool in the evaluation of neonatal neck masses and, in many instances, may serve as a first imaging test. Modern multidetector CT scanners allow for fast image acquisition in the axial plane and reformatted images in orthogonal planes, thereby avoiding additional radiation to the child. Additionally, the short duration of scanning may help avoid the need for sedation. CT imaging of cervical lesions is especially helpful in the depiction of calcifications, blood products, and bony involvement. However, soft tissue resolution may be suboptimal for accurate lesion characterization, and further imaging with MRI may be necessary.

MRI is a superb imaging modality for the evaluation of fetal or neonatal neck lesions and may help further clarify the lesion’s relationship with surrounding structures. Fetal MRI is considered safe to perform in the second and third trimesters for further assessment of a cervical mass detected by routine obstetric ultrasonography. Fetal MRI is approved by the U.S. Food and Drug Agency for magnet field strengths up to 3.0 Tesla.

Fetal imaging prior to 18 weeks of gestational age is typically of little value because of the unknown safety profile of exposure to magnetic fields during organogenesis, as well as the relatively poor image quality in a small fetus. For fast and effective performance of fetal MRI, familiarity and optimal use of imaging sequences is crucial.

Useful MRI sequences for fetal neck imaging include the following:

2. Spoiled gradient echo T1-weighted imaging is helpful for imaging of the thyroid gland and blood flow within the major cervical vessels, as well as for depiction of intralesional blood products and calcifications.

4. Steady state or balanced gradient echo sequences are valuable in the prenatal assessment of preservation or impairment of swallowing in the fetus (Video 14-1). The details of fetal airway compromise secondary to the presence of a cervical mass should always be carefully examined.

MRI sequences for imaging of neonatal neck lesions include the following:

1. High resolution 2- to 3-mm T1- and T2-weighted and postcontrast imaging with fat-suppression in orthogonal planes

3. Diffusion-weighted imaging, which is particularly useful for identification of hypercellular tumors and infected cystic lesions with viscous, purulent content

Prenatal neck imaging sometimes may be more useful in the evaluation of lesion extension and, particularly, airway and upper gastrointestinal tract patency, rather than the establishment of a precise diagnosis. Knowledge of airway status may help facilitate prenatal counseling and management, including the decision to utilize the ex utero intrapartum treatment procedure. This procedure may be required for fetuses diagnosed with a giant neck mass to gain time to secure an airway while the neonate is still attached to the umbilical cord.

The postnatal appearance of prenatally diagnosed cervical lesions may be of additional diagnostic value, as certain lesions may have a predictable developmental pattern. For example, congenital hemangiomas may remain stable in size or become smaller, whereas teratomas are likely to increase in size; lymphatic malformations may develop blood-fluid levels caused by intralesional hemorrhage. For this reason, it is important to evaluate a cervical lesion throughout its phases of development.

The nomenclature of vascular anomalies had been a controversial topic until Mulliken and Glowacki proposed a classification that divides pediatric vascular lesions into two major categories: (1) vascular tumors and (2) vascular malformations. This classification, based on pathologic differences as well as the clinical and cellular behavior of vascular lesions, was widely accepted and adopted by the International Society for the Study of Vascular Anomalies in 1996.

Vascular tumors in young children are almost solely hemangiomas, which are true endothelial tumors with increased mitotic activity during the proliferative phase and eventual involution. Vascular malformations are congenital nonneoplastic lesions, which are further classified according to the type of abnormal vessel comprising the lesion. Vascular malformations, therefore, may consist of abnormal capillaries, veins, lymphatic vessels, or arteries, or of a combination of different types of vessels (i.e., arteriovenous malformation).

Additionally, vascular lesions are classified on the basis of hemodynamics as high-flow and low-flow types. Low-flow lesions consist of any combination of capillary, venous, and lymphatic components, whereas high-flow lesions contain arterial components. Vascular malformations grow in proportion to the patient’s growth but may exhibit rapid growth or expansion following infection, trauma, or hormonal changes such as during puberty or pregnancy. Vascular malformations do not involute spontaneously.

The current classification of vascular lesions serves to distinguish neoplastic from nonneoplastic entities, as they have different treatments and prognoses. However, this classification should not be perceived as a final arrangement. A better understanding of the molecular biology and genetics of vascular anomalies may lead to further refinement of the existing system.

Hemangioma is the most common vascular tumor of infancy. Two major types are recognized: (1) congenital (rare) and (2) infantile (common). The previously used categorization of hemangioma types as capillary, juvenile, or cavernous is no longer accepted. It should be noted that all types of hemangiomas have overlapping clinical, imaging, and histopathologic features.

Infantile hemangiomas are benign vascular neoplasms, with an increased incidence in premature children with low birth weight. These lesions have a predictable clinical course notable for early proliferation, which is often followed by spontaneous involution. Growth and involution continue with the following stages. The nascent phase may be observed in the first 2 to 4 weeks of life. A precursor lesion such as macula, multiple telangiectasias, or discoloration in a beard distribution may be seen at birth. The proliferative phase is remarkable for rapid growth of the tumor in the first year of life. At the proliferative stage, the hemangioma appears as a bulky compressible lesion of strawberry-red color and may have cutaneous as well as deep components.

On cross-sectional imaging, it appears as a lobulated mass with intense uniform enhancement, which usually demonstrates intralesional flow voids on MRI (Fig. 14-2, A). Proliferation may be biphasic. Careful assessment of upper airway status is important because the deep portions of a cervical hemangioma may enlarge sufficiently at this stage to impinge on the airway and cause obstruction. During the final involution phase, which may continue for up to 12 years, the rate of regression is variable. Involution is never complete, although the residual lesion may not be grossly visible; in the neck, it leaves persistent fibrofatty tissue. Infantile hemangiomas are positive for the glucose transporter 1 (GLUT-1) marker at all stages of lesion development. 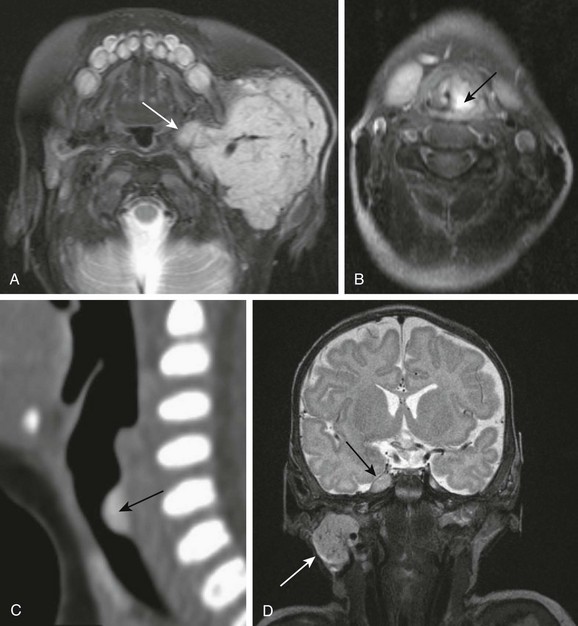 Most infantile hemangiomas do not cause any morbidity or mortality but may create cosmetic inconvenience. Nonetheless, a hemangioma of the neck is considered an alarming lesion if it assumes a beard distribution (involvement of the lower face, anterior neck, and submandibular and parotid regions) because of an increased incidence of subglottic hemangioma, high risk of airway compromise, and known association with PHACES syndrome (Posterior fossa malformations, Hemangiomas, Arterial, Cardiac anomalies, Eye anomalies, Sternal cleft). The arteriopathy of PHACES syndrome commonly comprises a spectrum of congenital and progressive large arterial lesions ipsilateral to the cutaneous hemangioma. It entails careful searching (and monitoring) with imaging for potential vascular anomalies once a diagnosis of cervicofacial segmental hemangioma is established.

Upper airway hemangiomas (see Fig. 14-2, B and C) become symptomatic in the proliferative phase, causing biphasic stridor, respiratory distress, and potentially even life-threatening airway obstruction, which may require emergent intubation. These hemangiomas are often multifocal and occur above and below the vocal cords. Close monitoring with cross-sectional imaging may be indicated because laryngoscopy may not accurately depict the degree of invasion. MRI is preferred in the setting of intubation or tracheostomy.

In the past, infantile hemangiomas have been confused with other vascular neoplasms, particularly kaposiform hemangioendotheliomas (KHEs) and tufted angiomas, especially in the setting of consumptive coagulopathy, referred to as the Kasabach-Merrit phenomenon; it is now generally accepted that infantile hemangiomas are rarely, if ever, responsible for this phenomenon.