Vast improvements have been made in the diagnosis and therapy of fetal anomalies as a result of advances in imaging and surgical technology. Nowhere is this more applicable than in the fetal spine. Ultrasonography is the primary imaging modality for fetal evaluation and helps distinguish normal spine development from abnormal spine development while providing valuable information about spinal anomalies. Magnetic resonance imaging (MRI) is complementary to ultrasonography for assessment of spinal malformations, as it has the advantage of better detection and depiction of associated central nervous system (CNS) and non-CNS anomalies that may have a significant impact on postnatal neurologic function and quality of life.

The major lesion of the CNS currently amenable to fetal diagnosis and intervention is open spinal dysraphism, commonly referred to as myelomeningocele (MMC); this lesion is a significant driving force behind the use of highly detailed prenatal imaging. The osseous detail and real-time evaluation of lower extremity configuration, position, and motion detectable with ultrasonography, combined with soft tissue and parenchymal assessments with the use of MRI, provide the maternal-fetal medicine specialist and pediatric neurosurgeon with highly detailed anatomic information. Because the surgery is not without risk to the mother and the fetus, obtaining extremely accurate information is essential for determining surgical appropriateness and presurgical planning. When significant congenital anomalies are present outside of the CNS, information about associated spinal abnormalities is valuable for counseling and parental decision making regarding the management of the pregnancy, labor, and delivery or interruption of the pregnancy.

The accuracy of identifying spinal anomalies during nontargeted screening ultrasonography varies, depending on the skill and experience of the operator. The accuracy of a referral center performing detailed targeting studies for a suspected neural tube defect (elevated maternal serum α-fetoprotein) is close to 100%. A detailed protocol should be performed. Because fetuses with open neural tube defects typically have Chiari II malformations, the fetal brain should be scanned initially. A small cisterna magna with rounded small cerebellum is termed the “banana sign” and is 99% sensitive in the diagnosis of a Chiari II malformation (Fig. 42-1). The frontal bones may be concave, and this is termed the “lemon sign.” This sign is less specific and may be present in 1% to 2% of normal fetuses and may resolve by the third trimester. Ventriculomegaly may be present. Axial and longitudinal views of the spine should be obtained. Spine ossification progresses from 10 to 22 weeks’ gestation. By 16 weeks’ gestation, neural arch ossification is complete to L5. By 19 weeks, S1 is completely ossified, and by 22 weeks, S2 is ossified. Splayed pedicles are best visualized in the transverse plane. An overlying sac may be imaged in transverse and longitudinal planes, with higher-frequency transducers showing cord tethering and placode contents (Fig. 42-2). 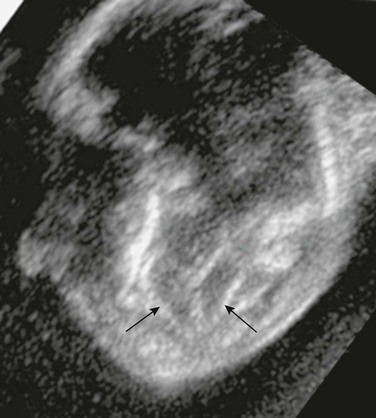 Figure 42-1 Banana sign.
An axial ultrasonographic image through the posterior fossa in a 21-week fetus with a Chiari II malformation shows the crowding of the cerebellum around the brainstem that has been termed the “banana sign” (demarcated by arrows). 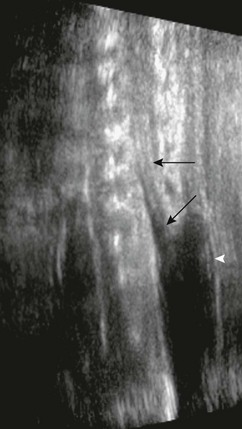 Figure 42-2 Myelomeningocele.
Longitudinal ultrasonography through the lumbosacral spine in a 20-week fetus shows the defect in the posterior elements, with the abnormally low spinal cord extending to the level of the defect (arrows).

Fetal MRI is typically performed on 1.5 Tesla (T) magnets, although some centers are now performing fetal MRI at 3.0 T. A surface coil (torso, cardiac, or body phased-array) is used to maximize image quality. A standard localizer sequence generally facilitates quick identification of fetal position. This is used to guide the initial imaging plane, which should be appropriately aligned with the fetal anatomy in question. Subsequent imaging sequences are prescribed in orthogonal planes with respect to the fetal spine, each adjusted from the preceding image set, to account for changes in fetal position.

Abnormalities in neurulation may result from defects in disjunction, the process by which the neural tube separates from the overlying ectoderm. A large site of complete failure of disjunction may result in MMC. Prenatally, the findings of MMC are clearly detectable with ultrasonography and MRI. In the presence of elevation of the neural placode, secondary to expansion of the subarachnoid space, the lesion is referred to as MMC (Fig. 42-3). This is distinguished from myeloschisis, also known as myelocele, where an open neural tube defect exists, but the subarachnoid space is not expanded, and the neural placode remains within the confines of the dysraphic spinal canal (Fig. 42-4). MMC occurs during the formation of the primitive neural tube (neurulation) in the third week of gestation, when a localized failure of neural tube closure occurs. This failure may occur anywhere along the length of the spinal cord, but it is most common in the lumbar region. The resulting lesion is an open spinal canal with a flat neural placode instead of a cylindrical spinal cord. Imaging reveals the failure of neurulation in the MMC as a posterior osseocutaneous defect. When present, the expansion of the subarachnoid space is readily apparent (see Fig. 42-3). The neurologic deficits sustained by the fetus are postulated to occur in stages—a “two-hit” hypothesis. The first “hit” is the original defect in neurulation that creates the dysraphism and any associated myelodysplasia. The second “hit” is the secondary chemical or physical trauma (or both) to the neural tissue as a result of its exposure to the intrauterine environment. 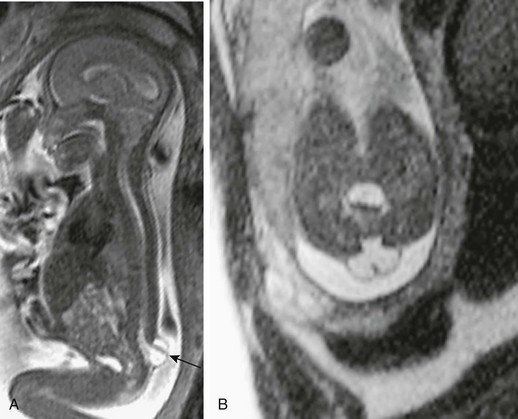 Figure 42-3 Myelomeningocele.
A, A sagittal half-Fourier acquisition single-shot turbo spin echo (HASTE) magnetic resonance image in a 21-week fetus with a small myelomeningocele sac protruding at the lumbosacral junction level. The neural tissue can be readily identified traversing the sac (arrow). Note the Chiari II malformation findings. B, An axial HASTE image at the lumbosacral level shows the expanded subarachnoid space protruding through the wide posterior element deficiency. Note the neural placode outside the confines of the canal, traversing the sac. 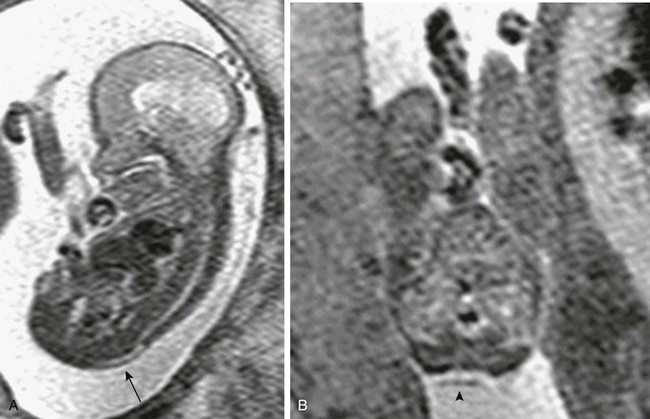 Figure 42-4 Myeloschisis.
A, A sagittal half-Fourier acquisition single-shot turbo spin echo (HASTE) image of the spine in a 19-week fetus with a posterior spinal defect. The placode remains within the spinal canal (arrow). B, An axial HASTE image at the lumbosacral level shows the wide posterior element deficiency and neural placode within the confines of the broad canal (arrowhead).

A unified theory regarding the pathogenesis of the associated Chiari II malformation was postulated by McLone and Knepper, who suggested that the open spinal canal and associated free drainage of cerebrospinal fluid (CSF) promote collapse of the primitive ventricular system and cause lack of expansion of the rhombencephalic vesicle, from which the posterior fossa develops. This lack of distention leads to an abnormally small posterior fossa and subsequent herniation and other associated malformations in the brain. The Chiari II malformation is a pancerebral anomaly, affecting broad areas of the brain. Abnormalities include herniation of the medulla, cerebellar tonsils, and vermis through the foramen magnum; a small posterior fossa; “beaking” of the tectum of the midbrain; an enlarged massa intermedia of the thalami; partial or complete callosal dysgenesis; and structural changes in the skull (Fig. 42-5). Migrational abnormalities, particularly subependymal gray matter heterotopia, also are commonly seen. The cause of hydrocephalus in patients with MMC is frequently debated. Current theories include mechanical obstruction secondary to anatomic changes associated with the Chiari II malformation and dysfunctional CSF absorption. Clinically, hydrocephalus may not be present at birth but may become apparent after early postnatal closure of the defect. 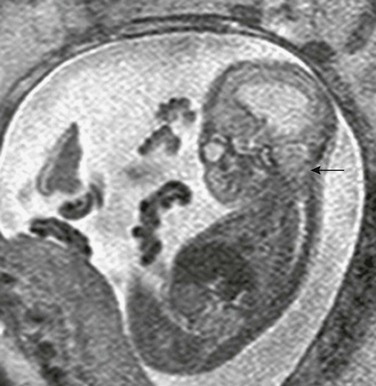