The advantages of computed tomography (CT) are immense and have revolutionized the practice of medicine. Since its birth, the applications of CT have extended to different regions and areas of the body, allowing vast advances in the non invasive diagnosis of numerous diseases. Currently, most of the radiation applied for diagnostic purposes arises from the use of CT [1, 2], nuclear medicine and fluoroscopy. Furthermore, in the last decade with the oncoming of multislice CT (MSCT), there occurred a sustained increase in the utilization of this modality worldwide, with the consequent rise of the radiation dose in the population [3]. This fact has caught the attention of health authorities, the medical community in general and, specially, of radiologists, becoming a topic of high interest and importance around the globe.
The global concern over the possible consequences of the high radiation doses has led to a tendency of diminishing the radiation generated by CT studies [4, 5]. The largest existing evidence on the potential risks is based on publications which describe the relationship between the exposure to ionizing radiation of survivors of the atomic bombing of Japan and the development of cancer and cardiovascular diseases [6, 7]. Up until now the published works present no conclusive statistical evidence on the carcinogenic effect, and hence of any known risk, of doses below 100 mSv. Moreover, the carcinogenicity has been inferred via statistical calculations and extrapolations since enough time has not elapsed for the apparition of malignancies in individuals exposed to the radiation of CT [8, 9]. Despite information derived from survivors of the atomic bomb in Japan and other events which suggest that the expansion of the use of imaging techniques which utilize ionizing radiation will result in a higher occurrence of cancer in the exposed population, the problem can probably be minimized via the prevention of the inadequate use of diagnostic methods and the optimization of the studies performed to obtain the best image quality with the least radiation dose.
Due to the constant technological development and the numerous research works on CT which describe new and practical applications, the number of studies will continue rising as is often the case during the many years which are required for a new technique to reach its equilibrium. The radiologic community plays in this process an important role in the handling and control of the factors which influence the radiation dose received by the patient. Each of them must be analyzed taking into account the age, gender and state of health. The knowledge of the technical parameters and their adapted modification for each case subject to study, allows adjusting the necessary dose, avoiding excessive radiation [10]. Besides, in the last years new tools have been developed which are able to substantially reduce the radiation dose of the CT, without significantly diminishing the diagnostic quality of the study [11].

The hysterosalpingography (HSG) is a radiologic procedure for the evaluation of the uterine cavity and the Fallopian tubes which has been utilized especially in the diagnostic algorithm of patients with primary or secondary infertility. The recent concern over the risks of the radiation related to diagnostic modalities, is even larger in HSG studies due to the fact that the examined anatomical region affects the gonads, and the patients which are subject to these studies compromise a young age group who which to become pregnant.
The HSG studies are performed via fluoroscopic control. During the gradual introduction of the contrast medium, various exposures and radiographic captures are effectuated to document the filling of the uterine cavity, the opacification of the tubes and the passage of the contrast to the peritoneum. The average time of exposure to the fluoroscopy which is employed during the exam is 2 min, while the number of radiographies obtained is an average of 6 in each HSG study. Both exposures, the fluoroscopic and radiographic, radiate primarily the gonads and determine the radiation dose employed [12].
The deleterious effects associated to the HSG refer to the radiogenic risk of the future embryo, as well as the risk of cancer induction of the exposed woman [13]. The scientific unit most utilized for the measurement of radiations is the millisievert (mSv). Each organ and tissue has a different sensibility to radiation; therefore, the radiogenic risk varies in each study according to the explored area and technique employed. The term “effective dose” refers to the radiation quantification taking into account the relative sensibilities of the different exposed tissues [14]. Little data exists on the literature which refers to the radiation dosimetry in HSG procedures. The effective dose in HSG was informed in only two publications [12, 13]. An estimation of the risks associated to HSG was reported in a recent study [15]. However, there exists a noticeable variation in the HSG technique utilized in different centers regarding the quantity of fluoroscopic exposure (0.3–8.5 min) and the number of radiographies obtained (0–14) [13]. Hence, the effective dose calculated for a HSG study which utilizes 2 min of radioscopy and six radiographic exposures is 5 mSv. Furthermore, the fact that different radioscopic control systems exist must be taken into account: conventional, remote and digital, consequently the data presented previously can be non applicable to patients subject to HSG procedures with the use of different units and technical parameters, and according to the case, a dosimetry must be carried out for each patient in particular [16, 17].

Evolution of the Radiation Dose in Virtual Hysterosalpingography

Since the development of the virtual hysterosalpingography over 10 years ago, the technology has evolved and the acquisition technical parameters modified in the search for better image quality, better results, and also, the lowest radiation dose possible. In its beginnings, the virtual hysterosalpingography studies were performed with the same technical parameters utilized in routine pelvic CT exams. For the study of an area of 15 cm of length, with a tube voltage of 120 kV and a current of 250 mA, the estimated effective dose is of 2.6 mSv [18]. In these studies, the acquisition parameters, among them the radiation dose, were adjusted to obtain an image which would allow the distinction of subtle density contrasts between the different soft tissues, and also to diminish the noise in the image. But when a specific distended organ is examined (uterus and tubes) with positive contrast material (hyper-dense), a great attenuation difference is created between the uterine cavity and the adjacent structures. In this way, the existing high contrast gave way to modifications in the scanning protocols and to significantly diminishing the radiation dose. The tube current was the corrected factor, utilizing between 100 and 150 mA, depending on the habitus of patients. Furthermore, the scan length was reduced to 10 cm, adjusting the plane of study to the region of interest. The estimated radiation dose with these parameters varies between 0.9 and 1.3 mSv [19]. Recently, with the incorporation of new programs which perform reconstructions of raw data in order to diminish the noise and enhance the image resolution (iterative reconstruction), the tube voltage was able to be reduced with no damage to the quality of the study. Thus the current protocols employ 80 kV and 100–150 mA, with an estimated effective dose of 0.3–0.4 mSv (Fig. 14.1). In Table 14.1 the comparison of the radiation dose utilized in different radiographic and tomographic studies is shown. 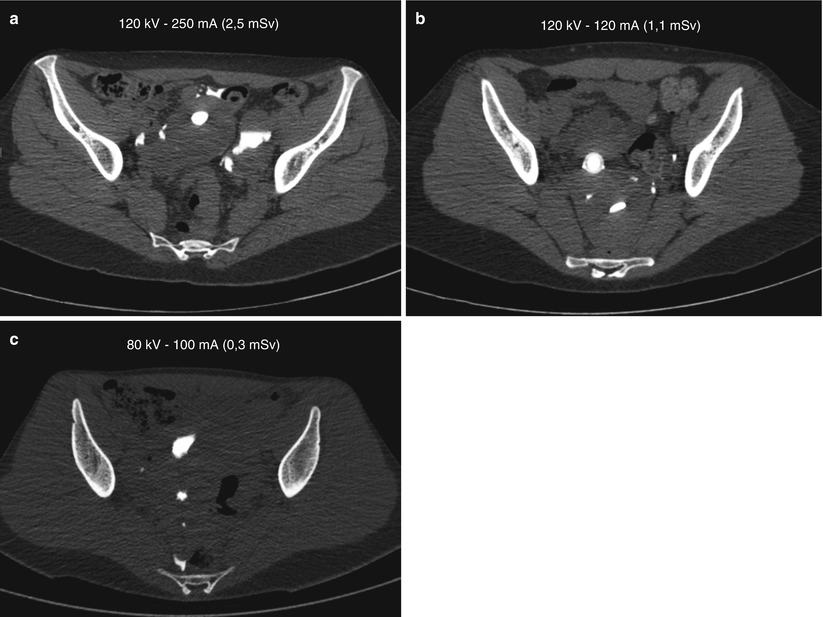 
Factors Which Influence the Radiation Dose in Virtual Hysterosalpingography Studies

Theoretically, there exist three principal reasons for incrementing the radiation dose in virtual hysterosalpingography studies. One of them is the use of multislice units, taking into account that these studies must be performed with scanner of 64 or more rows of detectors. Without a correct adjustment of the acquisition parameters, this implies a larger radiation dose in comparison with helical units due to a geometric defect, called penumbra effect [20]. Another of the reasons is the slice collimation necessary of 1 mm or less, in search of obtaining an increased spatial resolution, but with the inevitable cost of increasing the effective dose to try to achieve the diminishing of the noise in the image. The final factor is occasional and has to do with the procedure itself; it is the necessity of additional acquisitions in cases where the first image is incomplete or insufficient, which would lead to an increase in the radiation dose for the patient.
The use of adequate acquisition technical parameters, amid which we must highlight the collimation, pitch, voltage and x-ray tube current, has a direct effect on the radiation dose which each patient receives. Next, the managing of these variables, which determine the different strategies for diminishing the radiation as low as possible, without causing detriment on the quality of the images.

The effective dose depends mainly on the quantity of radiation utilized during the exam, relating directly with the level of effective mAs (miliamper per second). The latter is determined by the tube current (in mA), the tube rotation time (in seconds) and the pitch. With the adequate use of these parameters an excessive exposure to radiation can be avoided. The easiest way to reduce the dose is to lessen the tube current, with a low rotation time, and a stable pitch close to 1. This is determined taking into account the age, gender, habitus and the region to examine of each patient, among other factors [21, 22].
Only gold members can continue reading. Log In or Register to continue