Sarcoidosis is an idiopathic disorder characterized by the presence of noncaseating granulomas, often found in relation to lymphatics, and involving many organs. It typically presents in patients less than 50 years of age, but may rarely be first diagnosed in older patients. While sarcoidosis is a systemic disease, it affects the thorax in at least 90% of cases. For this reason, HRCT is often the initial diagnostic examination obtained in patients suspected of having sarcoidosis.

Sarcoidosis demonstrates striking demographic differences, with the highest prevalence seen in people of Scandinavian descent and African Americans. Sarcoidosis is much less common in Asia and in countries close to the equator than in the United States.

Up to one-half of patients with sarcoidosis are asymptomatic and diagnosed by incidental findings on radiological examinations performed for other purposes. Mortality from sarcoidosis, approximately 1% to 5%, is low compared with other diffuse lung diseases.

Staging of sarcoidosis is based upon plain radiography and has not been validated using HRCT. Subtle parenchymal lung changes or lymphadenopathy on HRCT may not be seen on chest radiographs.

The stages based upon chest radiographs are as follows:

Stage I:   hilar lymphadenopathy only

Pulmonary abnormalities in sarcoidosis are a manifestation of interstitial or airway granulomas and the subsequent development of pulmonary fibrosis or airway obstruction. The variety of abnormalities that may be seen on HRCT include perilymphatic nodules, consolidation and masses, ground glass opacity, mosaic perfusion, air trapping, irregular reticulation, traction bronchiectasis, cysts, and honeycombing (Table 12.1). Abnormalities typically have an upper lobe predominance, although this is not always the case.

The granulomas of sarcoidosis involve pulmonary lymphatics. Clusters of microscopic granulomas appear as small nodules having a perilymphatic distribution, described in detail in Chapter 3. Nodules tend to involve the lung in a patchy fashion, with some areas of lung appearing abnormal and some areas appearing unaffected. 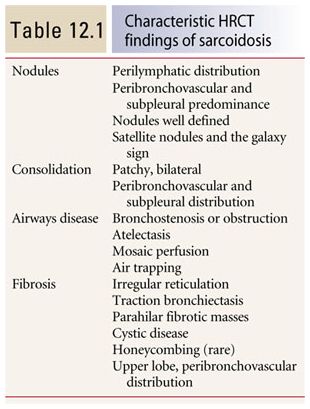 The following structures are typically involved by perilymphatic nodules in sarcoidosis:

Nodules in sarcoidosis are typically well defined and have a preference for the parahilar peribronchovascular and subpleural interstitium (Figs. 12.1 to 12.3). Frequently, there are clusters of nodules within the interstitium surrounding central bronchi and pulmonary arteries. Mass-like conglomerates of nodules may be present in these locations. Nodules and clusters of nodules are also frequently seen in the subpleural interstitium, including the interstitium adjacent to fissures. Often in patients with sarcoidosis, nodules are limited to the peribronchovascular and subpleural regions, although the severity of involvement in these two locations may vary greatly (Figs. 12.1 to 12.3).

Typical sarcoidosis with peribronchovascular and subpleural nodules. A–C. In a patient with extensive lung involvement, HRCT shows clusters and masses of nodules that predominate in relation to the peribronchovascular interstitium surrounding parahilar arteries and bronchi (red arrows, B), more peripheral artery and bronchial branches (red arrows A and C), and the subpleural interstitium in the peripheral lung and adjacent to fissures (blue arrows). This patient has extensive lung involvement. 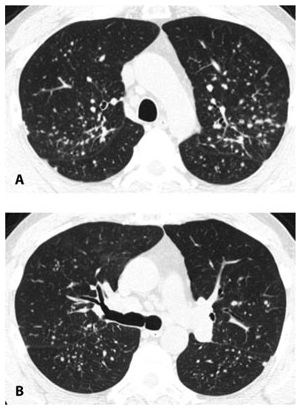 Typical sarcoidosis with peribronchovascular and subpleural nodules. A. HRCT shows scattered nodules in the parahilar regions, although a clear-cut relationship to airways and bronchi is more difficult to identify than in Fig. 12.1. Subpleural nodules are easily seen. B. At a lower level, the nodules are less numerous. An upper lobe predominance is typical of sarcoidosis. 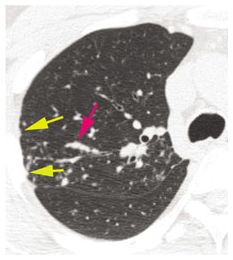 When peribronchovascular nodules are numerous, or when they involve the airway wall, they may cause narrowing or obstruction of central bronchi, occasionally producing lobar collapse (Fig. 12.4).

Rarely, the nodules of sarcoidosis show a centrilobular (Fig. 12.5) or interlobular septal predominance (Fig. 12.6). In such cases, nodules are usually also seen in the subpleural and peribronchovascular interstitium.

Sarcoidosis may occasionally have an appearance that mimics a random distribution of nodules. However, in such cases, there is often evidence that the pattern is perilymphatic. Nodules in these cases are usually not uniform, with a greater number of peribronchovascular or subpleural nodules present than is expected for a random distribution (Fig. 12.7). 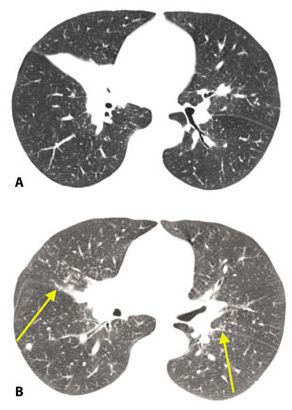 Sarcoidosis with right middle lobe collapse. Extensive peribronchovascular granulomas or endobronchial granulomas may cause bronchial narrowing or obstruction. A. In this patient, right middle lobe collapse is the result of bronchial involvement associated with hilar lymph node enlargement. B. At a different level, this patient shows scattered nodules with involvement of the fissures (arrows). 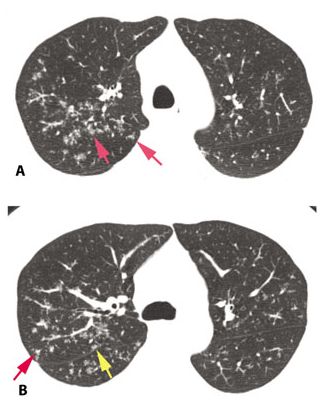 Because the nodules in sarcoidosis involve the interstitium around the central and peripheral airways, transbronchial biopsy is frequently able to obtain diagnostic tissue for histologic confirmation of disease. The biopsy results in these cases must be interpreted in the context of the HRCT findings and clinical presentation. Biopsies in patients with sarcoidosis show noncaseating granulomas, but these may be seen in other disorders as well. Thus the final diagnosis reflects a compilation of the pathology, radiology, and clinical factors.

The differential diagnosis of perilymphatic nodules (Table 12.2) includes lymphangitic spread of malignancy, lymphoid interstitial pneumonia (LIP), pneumoconioses such as silicosis and coal worker’s pneumoconiosis, and amyloidosis. Clinical history is important in suggesting one of these alternative diagnoses. For instance, patients with LIP usually have a history of connective tissue disease or immunocompromise. Lymphangitic spread of malignancy typically occurs in patients with a known tumor. Patients with pneumoconiosis have an extensive exposure history. Sarcoidosis tends to occur in a younger patient population than the other causes of perilymphatic nodules.