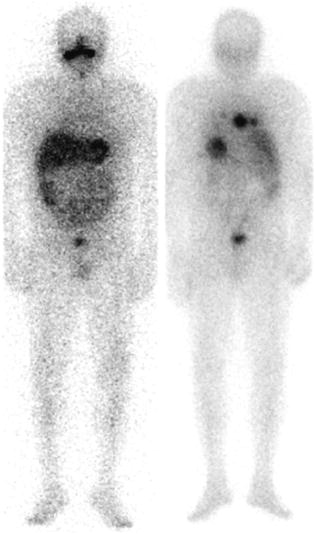 Post therapy scans of a 54 y/o male with a history of poorly differentiated thyroid cancer before (left) and after (right) treatment with retinoic acid (6 months later). Successful reinduction of radioiodine uptake or natural course of the disease?

The promising experimental results and their potential therapeutic impact prompted a number of centers including ours to initiate clinical studies to evaluate the effectiveness of 13-cis-retinoic acid (13-CRA) as re-differentiation therapy (RDT) in patients with advanced radioiodine non-avid thyroid cancer. This compound is a ligand for the retinoic acid receptor (RAR). The therapy is generally well tolerated and the most frequent side effects are dryness of skin and mucosa, and hypertriglyceridemia (Coelho et al. 2005). The clinical studies have confirmed that 13-cis retinoic acid therapy leads to restoration of radioiodide uptake (Grunwald et al. 1998a, b; Simon et al. 1998) and in some cases even to tumor regression (Boerner et al. 2002; Simon et al. 2002; Gruning et al. 2003; Haugen 2006; Oyen et al. 2007). Overall induction or increase in I-131 uptake is observed in about 30 % (range 6–62 %) of cases (Table 2). However, this increased uptake did not transfer to clinical results and most studies objective tumor regression was not achieved (Courbon et al. 2006; Handkiewicz-Junak et al. 2009; Kim et al. 2009). It has to be noted, however, that none of these studies used RECIST criteria to assess radiological response. Evaluation of biochemical response (change in serum thyroglobulin level) is complicated by at least two factors. First, if patients are treated under endogenous stimulation, serum Tg, before and after 13-CRA treatment, is measured under confounding TSH factor (first TSH suppression than stimulation) that precludes direct comparison. The second question is, how biochemical response should be defined. Should it be defined as an increase in Tg level directly after 13-CRA treatment, or should it be decrease in Tg level during follow-up. The first situation is regarded as a sign of tumor redifferentiation. The latter if accompanied by tumor regression or stagnation in radiological examination can be regarded as decrease in cancerous cells. The interpretation of an “increased” radioiodine uptake also carries certain limitations since a qualitative assessment of the iodine avidity is prone to a lack of reproducibility and more sophisticated individual dosimetry was in most cases not part of the published studies. All in all the above-mentioned studies have so far failed to translate into a marked clinical effect and response rates of the order of 20–30 % can be expected (Simon et al. 2002; Gruning et al. 2003).


One of the reasons for this lack of success could be the specificity of 13-cis RA. There are some in vitro data (Schmutzler et al. 1997; Haugen et al. 2004) suggesting that a differential expression of both RAR and the retinoid receptor RXR in thyroid carcinoma cell lines and tissues is present (Haugen et al. 2004; Elisei et al. 2005), which corresponded to the responsiveness to ligands for these receptors. A novel drug tested in DTC redifferentiation therapy is Bexarotene, an RXR agonist, which also has affinity to and induces transcriptional activation of RAR. The anti-neoplastic potential has been demonstrated not only in cutaneous T cell lymphoma (Farol and Hymes 2004), but also in other malignant tumors (Rigas and Dragnev 2005). In DTC 6 weeks of Bexarotene treatment was able to reinduce I-131 uptake in 8 out of 11 (72 %) patients with metastatic DTC (Liu et al. 2006); nevertheless, the uptake was only discernable at SPECT and not present in all metastases, visualized by CT scanning. There were no complete or partial responses and after 6-month follow-up most treated patients suffered from disease progression. To complicate the even more the interpretation of the clinical usefulness of RA in thyroid cancer, none of the published studies were randomized, blinded study and effectiveness parameters were not uniformly studied (Table 2). Also, none of the studies analyzed progression-free or overall survival. Therefore, the question on clinical validity of retinoids in differentiated thyroid carcinoma still awaits confirmation.
Controlled clinical trials to further establish criteria for the pretherapeutic selection of patients who will benefit from RA therapy and to quantify tumor doses achieved in relation to clinical outcome are still sparse. For the future of these agents a more sophisticated approach could probably be based on the determination of the individual receptor status, one of the primary research goals to be addressed (Haugen et al. 2004; Schmutzler et al. 2004). However these developments have to be discussed in the presence and future advent of other therapeutic target developments in general oncology impacting on up-to-date thyroid cancer management.

One of the mechanisms by which cells can block the expression of certain genes is by enzymes that methylate these genes or de-acetylate the histones that envelope a particular gene. These mechanisms also play a role in the silencing of genes in cancer. Therefore, compounds that can reverse methylation or inhibit histone deacetylation may lead to the re-expression of genes that are silenced in cancer. Demethylation therapy has been proven successful in leukemia. In an in vitro study in thyroid carcinoma, the demethylating agent 5-azacytidine led to re-induction of NIS expression, accompanied by RaI uptake in thyroid cancer cell lines (Venkataraman et al. 1999). In parallel, the histone deacetylase inhibitor Depsipetide has been reported to reinduce NIS mRNA expression and RaI uptake in thyroid carcinoma cell lines (Kitazono et al. 2001) and inhibit the growth of several anaplastic and papillary thyroid cancer cell lines (Luong et al. 2006). Clinical studies with histone deacetylases are negative. There were no objective responses in 16 patients treated with histone deacetylase inhibitor—suberoylanilide hydrocamic acid—and in most patients treatment had to be stopped due to adverse effects (Ringel 2006). In the two recent trials of vorinostat, none of the studied patients achieved partial or complete remission (Woyach et al. 2009).

An interesting new class of drugs is the class of PPARgamma agonists. These drugs have been introduced as anti-diabetic agents. The involvement of PPAR-gamma in differentiation processes extends beyond the area of adipose tissue. Indeed, altered expression of PPAR-gamma and in vitro beneficial effects of PPAR-gamma agonists have been described in a number of malignancies. Interestingly, a unique chromosomal rearrangement has been described in benign and malignant thyroid neoplasms, involving PPAR-g and PAX-8 (Kroll et al. 2000). This rearrangement acts as a dominant competitive inhibitor of PPAR-gamma and from a theoretical point of view would render these tumors insensitive for PPARgamma agonists. In general, a decreased PPAR gamma expression is observed in DTC (Ying et al. 2003). Interestingly, PPAR gamma activation leads to subsequent activation of PTEN, which inhibits PI3K (see pathogenesis). Therefore, compounds targeting PPAR-gamma may be beneficial in DTC. Frohlich et al. investigated the effects of troglitazone, rosiglitazone, and pioglitazone on differentiation in normal porcine thyrocytes and in follicular carcinoma cell-lines FTC-133 and FTC-238. Troglitazone was most effective of the tested thiazolidinediones in re-differentiating the carcinoma cell lines as demonstrated by significantly increased radioiodine uptake and subsequent apoptosis (Frohlich et al. 2005). In the thyroid-derived cell lines FTC-133, FTC-238, and ARO an increase in differentiation has previously been shown. In a recently published clinical study, rosiglitazone, a PPARδ agonist, was able to induce radioiodine uptake in 5 out of 20 studied patients (Kebebew et al. 2009). A positive correlation between level of PPARδ expression and induction of radioiodine uptake was demonstrated. Radioiodine uptake was visible in 5 out of 7 patients with previously negative postherapeutic whole-body scan but with strong PPARδ staining while only in one out of nine with weak staining (Tepmongkol et al. 2008). Although this study did not provide any data on disease response it was an interesting approach in which redifferentiation therapy can be adjusted to molecular predictive factors.

Statins (e.g., lovastatin) have been shown to be potent inhibitors of the HMG-CoA reductase. They are able to bind HMG-CoA reductase, the rate-limiting enzyme of the mevalonate (MVA) pathway, approximately 1,000-fold more effective than the natural substrate (Wong et al. 2002; Demierre et al. 2005). They are regarded as safe and effective drugs in the treatment of hypercholesterolemia. In addition to their primary use, the anti-cancer activity of statins was intensively studied and in vitro studies show an effect on growth and invasion of tumor cells (Wang et al. 2003; Zhong et al. 2005). Wang et al. also found a significant effect of lovastatin on differentiation of the anaplastic thyroid cancer ARO cell line. At a dose of 25 μM, lovastatin was able to significantly increase iodine uptake (Wang et al. 2003). This re-differentiating effect, which was observed at clinically achievable concentrations of lovastatin and troglitazone, may be highly beneficial in patients with differentiated thyroid cancer as iodine uptake can be lost in DTC metastases due to dedifferentiation.

Another intriguing development is the advent of kinase inhibitors. The development of imatinib mesylate (Gleevec) is prototypical for the innovative design of modern drugs with the molecular pathogenic defect as a starting point. Following imatinib, other small molecules have been developed, aimed at other tyrosine kinase activated pathway. Tyrosine kinase inhibitors interact with several targets including VEGFR, EGFR, PDGFR and KIT, RET, or BRAF tyrosine kinase. As discussed before activating mutations in BRAF, EGFR, and PI3 K and RET/PTC translocations are related to decreased NIS gene expression and other key genes involved in iodine metabolism (e.g., thyroid peroxidase and apical iodide transporter) (Durante et al. 2007, 2009). In thyroid cancer, most kinase inhibitors’ clinical effects can be attributed to inhibition of MAPK pathway and angiogenesis, but inhibition of other, currently unknown targets is also possible. In phase I and II clinical trials kinase inhibitors were able to induce tumor regression and long-lasting stabilization of previously progressive DTC (Kloos et al. 2009; Sherman et al. 2008). With the view of the decreased expression of genes involved in iodine metabolism in tumors with MAPK pathway activation, one study also evaluated effects of sorafenib (the multitarget tyrosine kinase inhibitor) on the reinduction of radioiodine uptake (Hoftijzer et al. 2009). Unfortunately, after 26 weeks of Sorafenib therapy none of the 31 treated patients demonstrated reinduction of I-131 uptake. Despite their promise, a significant proportion of patients are refractory to these drugs, most responses are partial, prediction of response to therapy is insufficient and toxicity is significant.

Despite the exciting new developments described above, effective redifferentiating therapies so far have not emerged. Many compounds that have a beneficial profile showed promising data in vitro and animal studies that are until now not confirmed in human studies. Part of the problem is that most industry sponsored studies in DTC do not explicitly include redifferentiating effects as a study goal, and mainly aim at tumor regression. Investigator-driven trials with retinoids, statins, ppar-gamma agonists, and epigenetic therapies typically have limited budgets and therefore not optimally designed as large-scale phase III studies. Many questions remain unanswered. At this stage, it is not possible to predict the efficacy of a certain drug from pathological or molecular characteristics of the tumor. Therefore, patients should preferably be included in clinical trials that involve the collection of tumor materials for profiling. Off label use should be generally discouraged for this reason. Another problem is in the design of studies aimed at redifferentiation, as already mentioned before. In most studies, RECIST criteria are used to assess tumor regression. Measuring redifferentiation is subject to many methodological problems, as has been mentioned for tumor marker response. In addition, because even advanced DTC is in most cases a chronic condition, a careful balance should be made between advantages and adverse effects of treatments. Sometimes, “watchful waiting” may be preferred in patients with asymptomatic, stable disease against the other therapy approaches. Decision criteria are the likelihood of cure, the prolongation of life-expectancy, palliation with low morbidity, potential side-effects of treatments, and patient’s age and preferences. Patients should therefore be referred to institutions where specialized multidisciplinary teams are available.
Only gold members can continue reading. Log In or Register to continue