Traumatic Lesions of the Skull and Face

Traumatic Lesions of the Skull and Face*

Congenital depressions of the calvaria occur as a result of mechanical factors that occur before or during birth.1 These depressions usually are visible by direct inspection, but radiographs often are obtained to search for associated fractures. During labor, depressions of the calvaria are caused by excessive localized pressure on the head by the bony prominences in the maternal pelvis, including the sacral promontory, pubic symphysis, and sciatic spines (e-Fig. 23-1). Application of forceps to the fetal head and traction with excessive force is another less common cause of congenital depressions that occurs during labor. 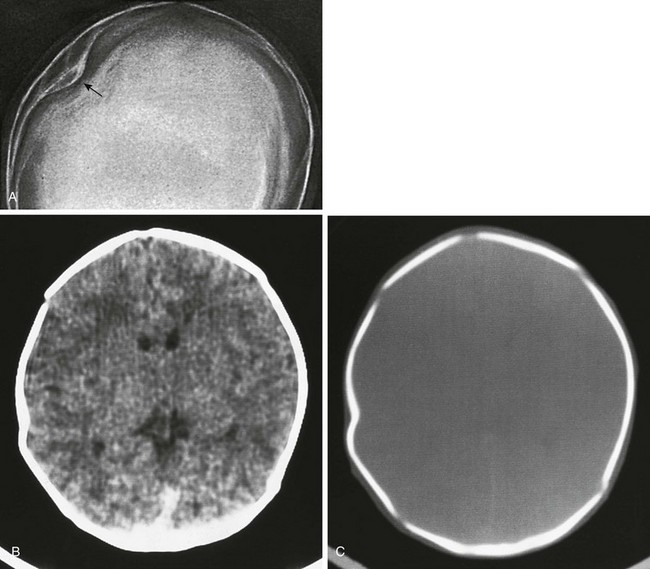 Severe cranial deformities also may develop during fetal life from sustained abnormal fetal positions (e-Fig. 23-2). Grooves in the calvarium and face may be caused by excessive pressure of an ectopic shoulder or limb. Lower and upper limb positions may be responsible and represent restrictions of the usual active movements of the fetus. Deformities also may arise as a result of pressure from amniotic bands. 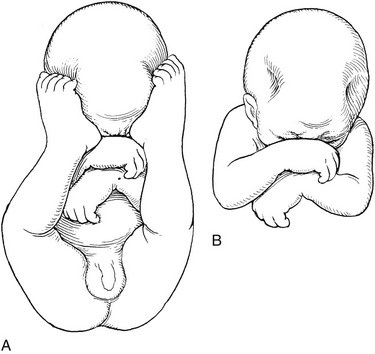 Cranial depressions that are present at birth and are not associated with edema or hemorrhage of the underlying soft tissues usually are due to long-standing faulty fetal position rather than to a recent birth injury. Spontaneous elevation of prenatal depressions during the first year after birth without adverse residual effects have been reported.1 Acute depressions as a result of the application of forceps, often called “ping-pong ball depressions,” have been elevated by simple tangential digital pressure on opposite sides of the depression and by suction with a hand-operated breast pump.2

Caput succedaneum is a local swelling of the scalp that contains edema fluid and blood and usually is a result of pressure on the presenting head. The condition is recognized at birth and disappears after a few days. Local swelling of the scalp casts a shadow of water density on skull radiographs that disappears without residual bone production or destruction. In rare cases, the hemorrhage can be so massive that associated shock occurs; in such cases, intracranial hemorrhage often is present.

Hemorrhage in the neonatal scalp may occur at three different levels: subcutaneous (as in caput succedaneum), subaponeurotic (subgaleal), and subperiosteal. More superficial bleeds cross suture lines and may extend widely into the face ventrally, onto the neck dorsally, and onto the zygomatic arches and mastoid processes laterally. Subgaleal hemorrhages also are known as cephalohematoceles and may contribute to the swelling and clinical findings in massive caput succedaneum. Subperiosteal hemorrhages are known as cephalhematomas. In contrast to the previous two conditions, cephalhematomas are confined sharply by the edges of the bones they overlie, and shells of bone form over them during resolution, arising from the elevated periosteum that covers them externally (Fig. 23-3). The usual cause of cephalhematomas is trauma to the fetal head during labor. Cephalhematomas also may develop after cephalic injuries during infancy and childhood. Fine linear fractures of the underlying bone may be found in the sites of cephalhematomas and are thought by some investigators to be the principal cause of bleeding of the pericranium. The incidence of cephalhematomas in two very large series of neonates was found to be 1.5% to 2.5%.3,4 Associated fractures were found in 25% of the cephalhematomas studied radiographically.3 The incidence of forceps delivery in the two studies was 75% and 33%, a probable explanation for the difference in the incidence of fracture-associated lesions. 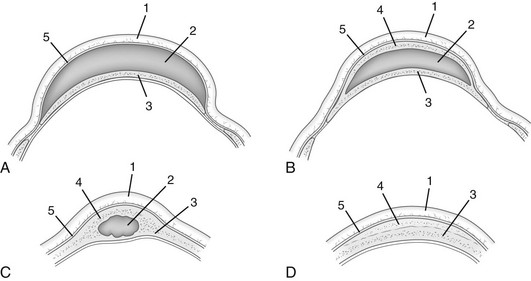 Figure 23-3 Diagrammatic sketches of anatomic changes that occur in a person with a cephalhematoma.
A, A fresh subperiosteal hematoma. B, The healing phase, which shows a new shell of subperiosteal bone over the hematoma. C, Persistence of an organized hematoma in the diploic space. D, Persistent residual external thickening of the outer table after complete resorption of subperiosteal blood. C and D represent late residuals that may persist into adult life. 1, Scalp; 2, hematoma; 3, normal calvaria; 4, new subperiosteal bone; 5, periosteum.

Clinically, subperiosteal cephalhematomas appear as localized swellings, usually over the parietal and occipital bone (Fig. 23-4). The fresh lesions characteristically extend over the entire surface of the affected bone and are sharply limited at the edges of the bone where the periosteum is bound tightly to the membranous tissue of the sutures. The parietal bones are most often affected, but occipital lesions are common and may be confused with occipital meningoceles during the first days of life. Frontal cephalhematomas are very rare. 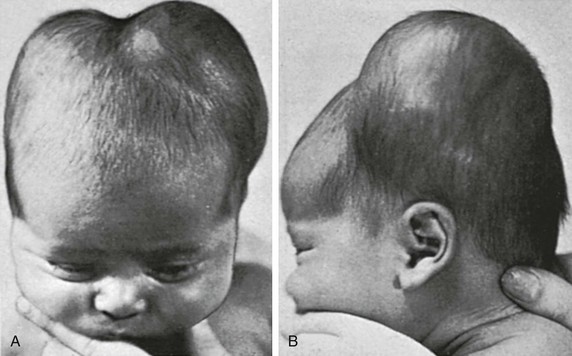 Figure 23-4 Bilateral parietal cephalhematomas in a 13-day-old neonate.
Limitation of the edges of the tumors to the sutures is shown clearly at the sagittal, coronal, and lambdoid sutures. The deep furrow between the two parietal cephalhematomas is due to fixation of the periosteum at the sagittal suture. Frontal (A) and lateral (B) views are provided.

The radiographic findings vary with the age of the cephalhematomas. During the first 2 weeks, the lesion is composed of fluid blood and casts a shadow of water density (Fig. 23-5). Near the end of the second week, bone begins to form under the elevated periosteum. It appears first at the margins, but soon the entire cephalohematoma is overlaid with a complete shell of bone (e-Fig. 23-6; see Fig. 23-5). Depending on their size, cephalhematomas clinically are gradually absorbed over 2 weeks to 3 months. The radiographic findings, in contrast, persist long after the clinical signs have disappeared (e-Fig. 23-7). The outer table usually remains thickened as a flat, irregular hyperostosis for several months and is gradually resorbed. Fresh cephalhematomas may become infected during bacteremia or needle aspiration.5 Ultrasonography may be used for early diagnosis, thus avoiding the use of radiation (Fig. 23-8). Associated fractures generally are of no clinical significance. 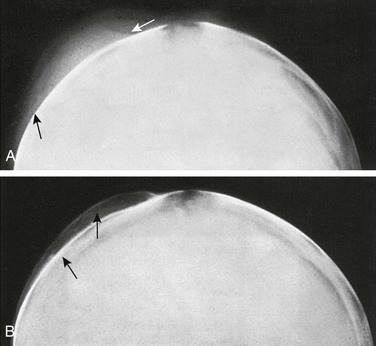 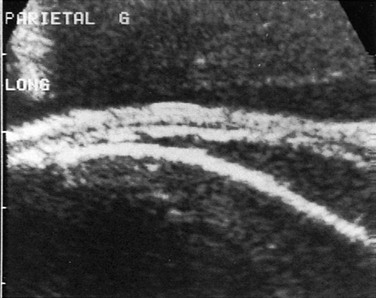 Figure 23-8 An ultrasound scan of the edge of a parietal cephalhematoma (compare with Fig. 23-3, B).
The periosteum is raised by the sonolucent blood; its width and echogenicity result from subperiosteal bone formation that is too minimal to show on radiographs. (Courtesy Dr. Daniel Nussle, Geneva, Switzerland.) 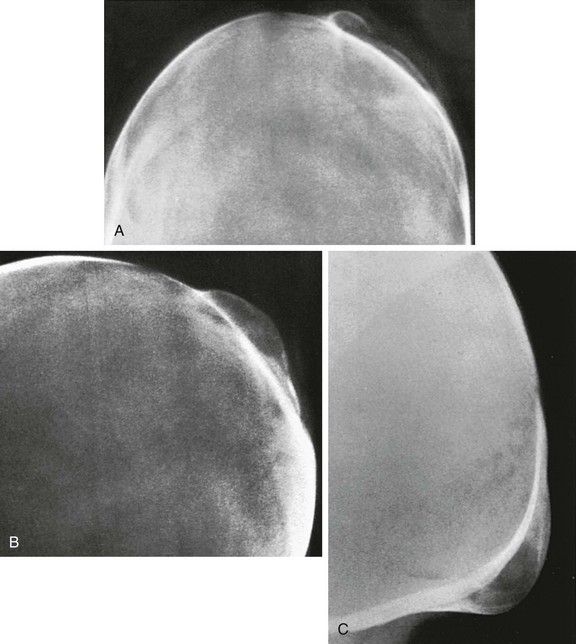 e-Figure 23-6 Changes in an ossifying subperiosteal hematoma on the left parietal bone of a 6-week-old infant who had been delivered by forceps.
Frontal (A) and lateral (B) projections are shown. A thin but incomplete shell of bone covers the hematoma. C, An occipital subperiosteal cephalhematoma with a complete and thicker shell of bone over the radiolucent mass of organized hematoma, both of which are sharply limited below at the level of the mendosal suture. 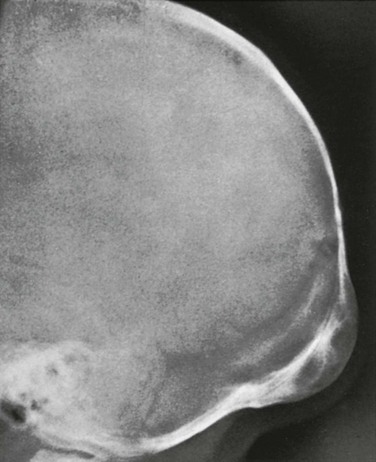 e-Figure 23-7 An ossifying subperiosteal cephalhematoma on the occipital squamosa of a 4-month-old infant.
The cephalhematoma extends from the lambdoid suture above to the level of the mendosal suture below, which is already fused. The large radiolucent patches beneath the subperiosteal shell of newly formed bone are cast by masses of blood in varying degrees of organization and resorption.

In some cases, the space between a new shell of bone and the inner table remains widened for many years, and the space originally occupied by the hematoma becomes filled with normal diploic bone (Fig. 23-9). In other cases, large and small cystlike defects persist in the sites of cephalhematomas (e-Fig. 23-10).6 Infantile cephalhematoma occasionally persists into adult life, when symptomless large segments of bone production and destruction still may be visible in the calvarium (cephalhematoma deformans) (e-Fig. 23-11).7 The possibility of a prior neonatal cephalhematoma should be considered in practically all lesions of parietal and occipital bones in older infants, children, and adults. An adequate history of the state of the neonatal head should be taken before the final radiographic evaluation of lesions of the calvarium is made. 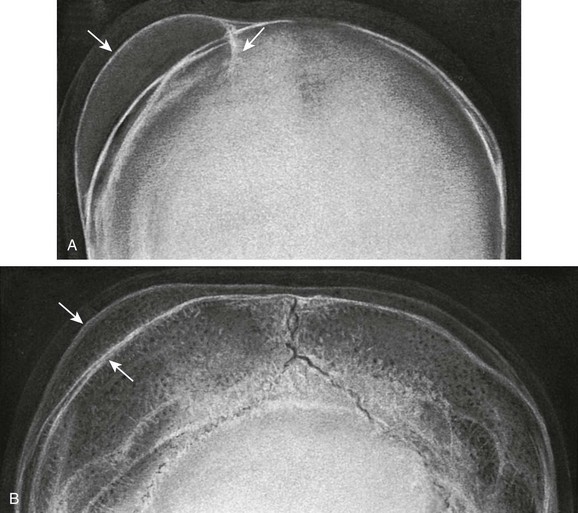