Other vascular causes of trigeminal neuralgia: (a) posterior fossa arteriovenous malformation, (b) brainstem cavernoma, (c) microAVM, and (d) developmental venous anomaly in the vicinity of the trigeminal nucleus (Drawing adapted from Harsha et al. [24])
According to increasing severity, MRI findings are graded as Grade I (simple contact between nerve and vessel), Grade II (displacement/distortion of nerve roots by vessel), and Grade III (indentation and thinning of nerve root) [25].
The sensitivity and specificity of high-resolution MRI for identification of neurovascular conflict varied from 52–100 % to 29–93 %, respectively. Because of the inconsistency of the results, according to the practice parameters prescribed by the AAN, there is insufficient evidence to support or refute the usefulness of MRI to identify vascular contact in CTN or to indicate the most reliable MRI technique.
Other imaging indicators of TN include an atrophy of the trigeminal nerve, a small ipsilateral cerebellopontine angle cistern, a short length of the cisternal segment of the trigeminal nerve, and a narrower trigeminopontine angle [25, 26].
Apart from neurovascular conflict, neuroimaging detected other structural causes in 10–18 % of cases [27].
The pitfalls of MRI include partial volume effects due to the small size of structures being imaged and a false-positive rate of 14–21 % of vascular compression in asymptomatic individuals [28].
In addition to anatomical imaging, diffusion tensor imaging (DTI) can objectively quantify the microstructural changes in the affected nerve. Coregistering anatomic and DTI images can enhance the localization of small structures. The fractional anisotropy in the ipsilateral nerve has been described to be reduced as compared with the contralateral side. ADC values remain unchanged [29].

Hemifacial spasm (HFS) is a peripheral movement disorder clinically characterized by paroxysms of tonic or clonic contractions involving muscles innervated by the ipsilateral facial nerve, predominantly the periorbital or perioral facial musculature [30]. Clinically, it needs to be differentiated from other causes of facial dyskinesias like blepharospasm, tics, myokymia, focal seizures, or psychogenic conditions. Usually unilateral, it may be bilateral in about 0.6–5 % cases [31]. While this condition is not life threatening, the clinical significance of diagnosing and treating this disorder lies in its disabling nature [32].

Dandy in 1932 [9], Campbell et al. in 1947 [33], and Gardner in 1962 [34] had initially reported that vascular compressions of the fifth and seventh cranial nerves were possible causes of trigeminal neuralgia and hemifacial spasm.
In 1977, Jannetta et al. [35] were the first to describe the site of compression of these nerves. They reported that vascular compression of the seventh cranial nerve at the REZ was a cause of HFS. They further elaborated that the compression of the nerve must be perpendicular to its course. Peripheral vessels and vessels running parallel to the nerve were previously not thought to be associated with HFS. The REZ of the facial nerve is the point where the cells forming the myelin sheath change from the central oligodendroglia to the central Schwann cells, making it most susceptible to irritation by mechanical stimulation such as vascular compression [36].
Other authors have described a far more distal location of compression midway between the REZ and the internal acoustic meatus (IAM) or at the IAM associated with HFS [37].
This compression is seen generally on the anterior surface of the facial nerve and is associated with typical HFS [38]. Rarely, it can occur at the rostral and posterior surface of the nerve and is then associated with atypical HFS [39].
Configuration variation of the facial-vestibulocochlear nerve complex may also be associated with the AICA compressing the distal portion of the facial nerve. In the case report described by Kawashima et al., the facial nerve arose 5 mm away from the vestibulocochlear nerve without forming a complex with it and was strongly bent posteriorly [40].
Patients with young-onset HFS (<30 years) account for up to 6 % of the patients overall. This subgroup may present with similar clinical features and imaging findings as the older subgroup. However, the older subgroup has more incidence of hypertension and its related changes in the vasculature.
HFS has a higher incidence in Asians, probably due to the smaller size of the posterior fossa.
HFS can also rarely be caused by other vascular abnormalities like vertebrobasilar ectasia (Fig. 3) and fusiform aneurysms at the vertebral artery (VA)–posterior inferior cerebellar artery (PICA) junction [41] and of the VA [42]. The VA fusiform aneurysm may also compress the contralateral facial nerve, causing HFS [43]. However, in the presence of aneurysms, the possibility of coexistence of additional causative vessels like PICA or AICA adjacent to the aneurysm should be ruled out. 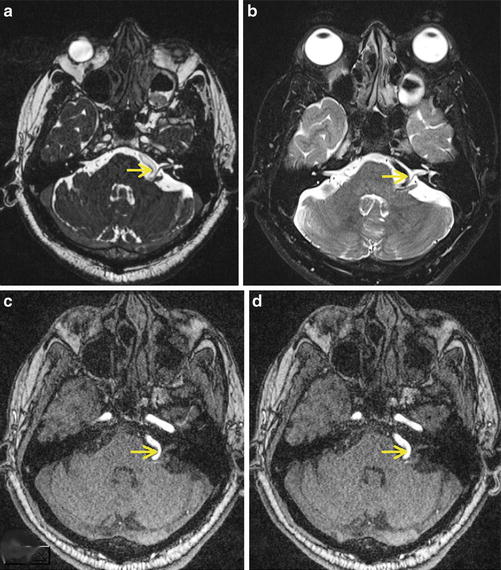 Role of Neuroimaging in HFS

HFS is mostly related to neurovascular compression of the facial nerve [32, 44]. Microvascular decompression is the surgical treatment of choice for providing symptomatic relief to the patients [45]. The decision to perform this surgery is based on clinical history and examination. However, rarely, another cause like a tumor or a demyelinating disorder may be detected [46]. Preoperative imaging is thus important to rule out a nonvascular cause. In addition, imaging of the neurovascular relationships at the REZ and delineating the responsible vessel may be important in the surgical planning to prevent/minimize intraoperative complications like hearing loss, facial paresis, and meningitis [47]. Imaging can also aid in patient counseling as the detection of a small compressing artery or vein may be associated with a higher postoperative recurrence rate of symptoms [48].

On imaging, we have to identify the course of the facial nerve and follow it from its origin, along the cisternal segment and up to the intracanalicular segment for any compression, contact, or indentation. The exact location of these findings on the circumference of the nerve has to be documented. In addition, the dominance of the vertebrobasilar system and rotation of the brainstem, if any, are noted. Finally, as described above, other findings like aneurysms, arteriovenous malformations, and nonvascular causes like tumors have to be excluded.
Neurovascular contact has been found in 86–90 % [49] of the patients on MRA and deformity of the nerves in 56 % of the cases. The MRA findings correspond with the surgical findings in 87 % of the cases. A false-negative rate of about 15 % has also been observed [50]. CISS sequence has a sensitivity of 100 % for demonstrating neurovascular compression [18].
Neurovascular compression of the facial nerve may also be seen in asymptomatic controls and in the contralateral asymptomatic side in patients with unilateral HFS. Thus, this imaging finding may not always lead to symptoms. According to Tan et al. [51], the MRI finding of contralateral NVC has a poor predictive value for the presence of bilateral symptoms. However, patients with bilateral symptoms have a significantly higher incidence of presence of contralateral NVC in addition to the ipsilateral NVC. Also, in patients with bilateral symptoms, there is a correlation between the severity of HFS symptoms and the degree of neurovascular compression at the REZ.

Other Rare Manifestations of Vascular Loop Syndrome and Their Imaging Features

Glossopharyngeal neuralgia is a rare condition characterized by severe, unilateral paroxysmal pain in the oropharynx, ear, or both locations, triggered by specific activities like swallowing, chewing, or coughing. It may also be manifested by other sensory phenomena like palatal myoclonus, syncope, or rarely even cardiac arrest. MRI can depict vascular compression of the glossopharyngeal nerve at the supraolivary fossette (especially by the posterior inferior cerebellar artery) [52].
Superior oblique myokymia is an unusual movement disorder with tonic or phasic abnormal eye movements caused by vascular compression of the trochlear nerve. High-resolution MRI can demonstrate arterial contact at the root entry zone of the affected trochlear nerve [53].
Vascular compression of the vestibulocochlear nerve has been suggested as a cause of tinnitus and/or vertigo by many authors [54]. However, other authors [55] have refuted these findings.