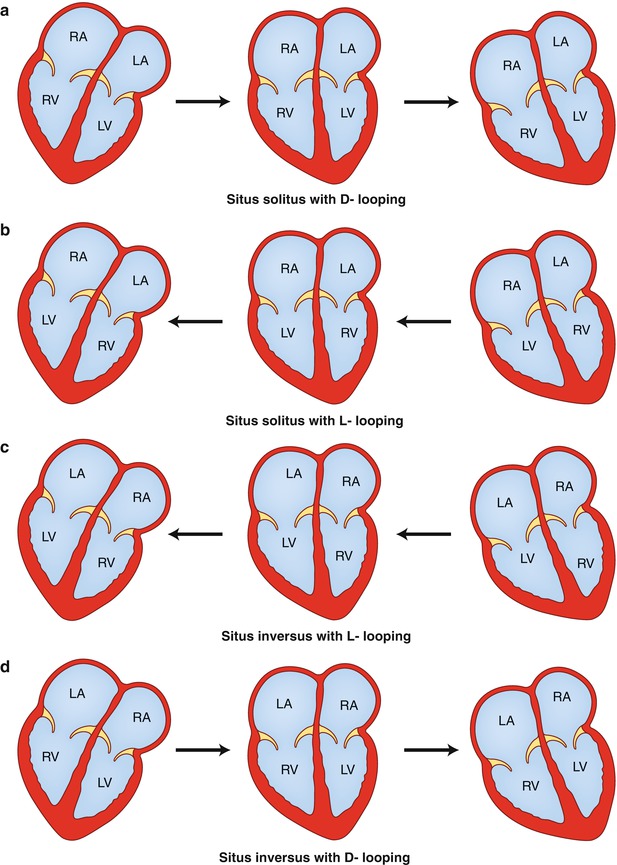 The thoracic and abdominal organs are usually lateralized on either side of the midline. Situs solitus totalis {S,D,S} refers to the expected configuration of thoracic and abdominal organs with a trilobed right lung and a right-sided liver and inferior vena cava. The cardiac apex is toward the left and the spleen, the stomach and the aorta are also positioned on the left. In the case of normal thoracoabdominal concordance, the rate of congenital heart disease is 0.8 % [13]. The mirror-image configuration of thoracic and abdominal organs is referred to as situs inversus totalis {I,L,I} and has a 5 % incidence of congenital heart disease [13]. Approximately 20 % of the cases of situs inversus totalis are associated with Kartagener syndrome [14] comprised of the classic triad of situs inversus totalis, chronic sinusitis, and bronchiectasis [15]. Conversely, only half of the patients with primary ciliary dyskinesia have situs inversus [12, 13].
In the rare occasion of thoracoabdominal discordance (thoracic situs solitus with abdominal situs inversus or vice versa), there is high incidence of congenital heart disease [1, 16].

In situs ambiguus or heterotaxy, there is duplication of right- or left-sided structures and abnormal arrangement of organs and vessels, not in the expected configuration of situs solitus {S,D,S} or situs inversus{I,L,I}. Splenic abnormalities are a hallmark of heterotaxy, and there is a high association with complex anomalies of the cardiovascular system. Rather than a distinct set, there is a spectrum of anomalies. The two major forms of heterotaxy are polysplenia and asplenia or Ivemark syndrome [1].
Polysplenia is associated with multiple spleens and bilateral left-sided structures (left isomerism) (Fig. 12.2a) [1, 2, 20–22]. In contrast to asplenia, polysplenia is more common in females and has a milder course, often presenting in childhood with a left to right shunt. However, some present in adulthood with an atrial septal defect and approximately 25 % of patients have no significant cardiac anomalies. Polysplenia is characterized by bilateral bilobed lungs and two hyparterial bronchi. A common atrium is usually present with morphologic characteristics of bilateral left atria. Congenital cardiac defects include endocardial cushion defects, double-outlet right ventricle, and left-sided obstructive lesions such as coarctation of the aorta, subaortic stenosis, or less commonly hypoplastic left heart syndrome. In contrast to asplenia, right ventricular obstruction and transposition of the great vessels are unusual, although minor forms of pulmonic stenosis have been described. Anomalous systemic and pulmonary venous drainage are seen, including partial anomalous pulmonary venous return, duplicated superior vena cava and azygos, or hemiazygos continuation of the inferior vena cava. 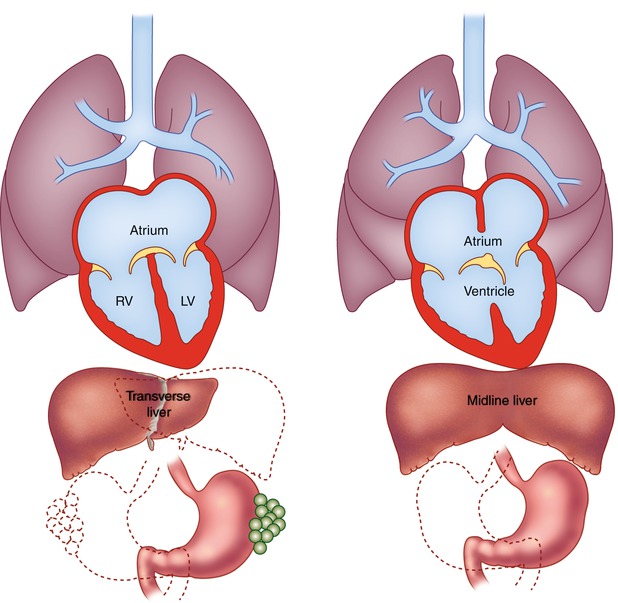 Schematic diagrams of polysplenia and asplenia. (a) Polysplenia is characterized by bilateral bilobed lungs and bilateral hyparterial bronchi. Positions of multiple small rounded spleens and stomach are variable. Congenital heart disease occurs in 75 % of these patients and is usually mild. (b) Asplenia is characterized by bilateral trilobed lungs and bilateral eparterial bronchi. Liver is often midline, spleen is absent, and position of stomach is variable. Congenital heart disease is nearly universal. Associated cardiac defects are generally severe and include common atrium and single ventricle with pulmonary stenosis or atresia
The gastric fundus can be right or left, and intestinal malrotation is common [23]. Multiple spleens are characteristic and can be seen on either side of the abdomen, resulting in the absence of Heinz and Howell-Jolly bodies on peripheral blood smear. The liver is usually midline or symmetric, and biliary and pancreatic abnormalities may be present (Table 12.3) [24].

From Spindola-Franco [1] with permission
Asplenia (Fig. 12.2b) is characterized by an absent spleen and duplication of right-sided structures (dextro isomerism, bilateral right sidedness) [1, 2, 25–28]. It is twice as common in males and has a high association with congenital heart defects (99–100 %) that present early in life and carry a grave prognosis. Unrecognized asplenia is only rarely encountered in adulthood. Congenital absence of the spleen is associated with immune deficiency, infections, and Heinz and Howell-Jolly bodies on peripheral blood smear.
Asplenia is associated with bilateral trilobed lungs and two eparterial bronchi. Anomalous systemic and pulmonary venous drainage are common, including bilateral superior venae cavae, total anomalous pulmonary venous return, and D- or L-malposition of the great arteries. There is usually a common atrium with anatomic characteristics suggestive of bilateral right atria or a large atrial septal defect. An atrioventricular canal (atrioventricular communis) is often present, as is a single ventricle or a large ventricular septal defect (bulboventricular foramen). If two atrioventricular valves are present, both may be patent or either one may be atretic. Right ventricular outflow tract obstruction is common, usually pulmonic stenosis or atresia, resulting in pulmonary undercirculation and cyanosis. Aortic stenosis or atresia is unusual in asplenia.
In the abdomen, the spleen is characteristically absent and the liver is usually midline. There is commonly ipsilateral course of the inferior vena cava and the aorta, resulting in their juxtaposition below the diaphragm [29]. The gastric bubble can be on either side of the midline, and there is a high occurrence of intestinal malrotation [23]. Other associations include agenesis of the gallbladder, annular pancreas, imperforate anus, horseshoe kidney, and urethral valves (Table 12.4).

The Role of Imaging 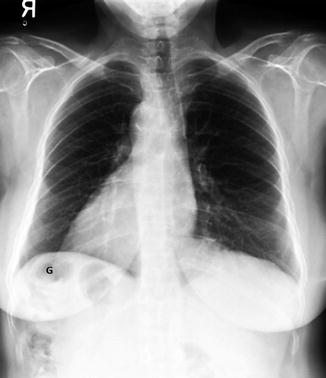 A 60-year-old woman with situs inversus totalis and no associated congenital heart disease. There is tracheobronchial situs inversus with a right-sided hyparterial bronchus and a left-sided eparterial bronchus. Dextrocardia and right-sided aortic arch are present. The stomach (G) is in the right upper quadrant and the liver shadow is seen in the left upper quadrant
In describing a patient’s visceroatrial situs, the chest radiograph is useful to assess not only the location of the cardiac apex (ventricular mass) and gastric bubble but also the tracheobronchial situs, which is usually concordant with the atrial situs [1]. These structures are also well demonstrated on CT and MRI, which allow simultaneous evaluation of the abdominal viscera. Dextrocardia in adults can be associated with any form of situs and is present in up to half of patients with heterotaxy [9, 31]. When an anomaly of visceroatrial situs is identified, knowledge of the associated cardiac anomalies is key to making the appropriate findings and ultimately the correct diagnosis, which serves as a guide to patient management.
When CT or MRI is performed for a cardiac indication, it is typically to answer specific questions, since echocardiography remains the first-line cardiac imaging modality [32]. Tailoring the examination appropriately requires every effort to obtain relevant anatomic and surgical history and review of prior imaging. CT and MRI outperform echocardiography in demonstrating extracardiac vascular anatomy and systemic and pulmonary venous connections [33]. MRI is considered a reference standard for estimating ventricular volumes and function. Phase-contrast sequences for flow quantification are useful in documenting the presence or absence of shunts by calculating the pulmonary to systemic blood flow ratio (Qp:Qs) and regurgitant volumes and estimating the degree of stenosis [34]. There is increasing evidence that delayed enhancement and viability sequences have prognostic implications in these adults.
Situs solitus and situs inversus with mesocardia have the same rate of congenital heart disease as patients with normal situs or situs solitus totalis (0.8 %). However, when congenital heart disease is present, the diagnosis of corrected transposition of the great arteries should be considered [35
Only gold members can continue reading. Log In or Register to continue