A 34-year-old man presented to the emergency department with leg pain. He had no history of trauma. 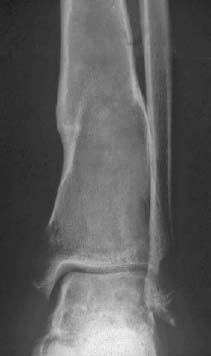 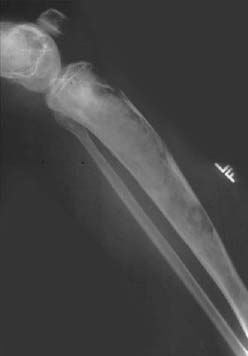 An anteroporsterior (AP) radiograph of the ankle and a lateral radiograph of the lower leg are provided (Figs. 123A, 123B). These images show two lesions in the tibia, both of which demonstrate mild expansile remodeling of the bone and an internal ground glass appearance. There is associated cortical thinning and endosteal scalloping without evidence of cortical penetration. There is evidence of an old healed pathologic fracture through the more distal lesion.

Fibrous dysplasia (a separate and distinct entity from osteofibrous dysplasia) is not a true neoplasm, but rather a noninherited developmental marrow-packing abnormality caused by a mutation that alters the gene controlling osteoblastic cell growth and differentiation.

The normal contents of the medullary canal are replaced by immature fibro-osseous tissue due to abnormal differentiation of osteoblasts. The affected osteoblasts do not undergo normal development and maturation, resulting in immature woven bone being present in the afflicted structures. Bowing of affected bones occurs because the bones are weakened by expansion of the lesion in the intramedullary aspect of the bone. Microfractures result in progressive deformity, and these patients are also prone to pathologic fractures and stress fractures. Typically, these bowing deformities are unilateral.

Patients may also present with leg length discrepancies and cosmetic deformities, particularly when the disease affects the facial bones and mandible. Patients with monostotic disease may have the disease noted incidentally when radiography is performed for some other indication.

Although the onset is usually in childhood, patients are most commonly adolescents or young adults at the time of diagnosis, with 75% presenting before age 30. There is a relatively equal sex predilection.

The monostotic form accounts for the majority (~80%) of cases. Patients with the polyostotic form of the disease tend to present earlier. Small lesions are often asymptomatic. Although the lesions are often painless, common presenting symptoms may include pain and swelling, which may, on occasion, be caused by pathologic fracture. Alternatively, bowing deformity may bring the patient to clinical attention. Vaginal bleeding has been reported as the presenting complaint in up to 25% of female patients with polyostotic fibrous dysplasia due to associated hormone abnormalities (see below). Involvement in the polyostotic form of the disease may be diffuse. Lesions may become more active during pregnancy, leading to increased pain, pathologic fracture, and secondary aneurysmal bone cyst (ABC) formation.