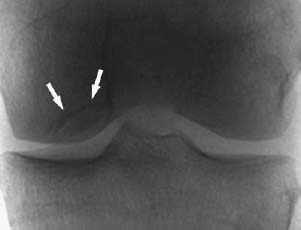 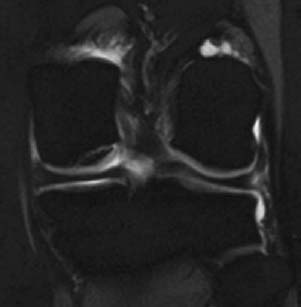 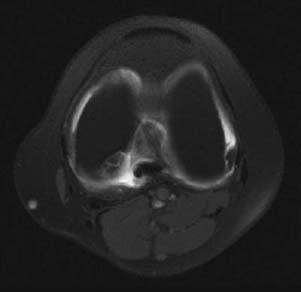 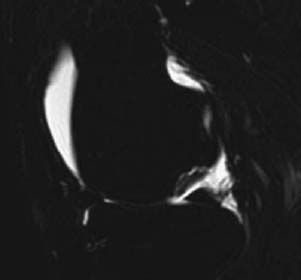 A “grabbed” fluoroscopic image (Fig. 77A) shows a convex sclerotic rim cephalad to and ovoid radiodensity, which is surrounded by a radiolucent line projected through the lateral aspect of the medial femoral condyle. T1 fat-saturated imges after intra-articular injection of dilute gadolinium (Figs. 77B, coronal; 77C, transaxial; and 77D, sagittal) show a discrete fragmented lesion of bone and cartilage in the posterolateral aspect of the medial condyle. Gadolinium is seen to undermine the fragment over ~75% of its surface area, especially posteriorly. A subtle linear low-signal alteration is evident within the cartilage at the medial margin of the lesion, whereas the cartilage is discontinuous laterally (Fig. 77B). The sagittal image reveals osseous discontinuity anteriorly and posteriorly.

Osteochondritis dissecans is the title given to a posttraumatic osteochondral fracture comprising variable osseous and chondral components, thought to be complicated by ischemia, the subsequent devascularization producing a focal transchondral or subarticular osteonecrosis.

The lesion occurs most frequently (75%) in the non–weight-bearing surface (lateral aspect) of the medial femoral condyle, from which comes the acronym LAME: lateral aspect medial epicondyle.

When osteochondritis dissecans occurs elsewhere in the skeleton, it affects the bone on the convexity of the affected joint (e.g., talar dome, capitellum, head of first metatarsal) almost exclusively, with rare exceptions, such as the tibial plafond and the glenoid.

The condition is bilateral in 20 to 30% of patients.

Some authorities describe osteochondritis dissecans as a subtype of avascular necrosis of bone, with which it may form a continuum, that is, a more focal manifestation of an ischemic insult rather than necrosis of a complete epiphysis. A history of trauma is found in ~50% of cases, however, and pathologic examination of the osteochondral lesions favors a traumatic etiology over avascular necrosis.

Osteochondritis dissecans of the femoral head occurs as a rare complication in the late onset of Legg-Calvé-Perthes disease, possibly secondary to a persistent loose fragment or the weakening induced during the revascularization phase.

Repetitive trauma produces a subchondral fatigue fracture, secondary to shearing or tangential forces, which is subsequently complicated by devascularization, resulting in focal osteonecrosis, whereby a segment of articular cartilage and subchondral bone dies and becomes partially or totally separated from the underlying bone. The fragments may thus consist of cartilage alone or cartilage and underlying bone, may remain firmly attached and eventually heal, or may partially or completely detach.

Cysts may form deep to the lesion (Figs. 77E, 77F) secondary to the influx of synovial fluid into the fracture site and the increased joint pressure as a result of the articular surface irregularity. The presence of cysts is associated with a higher incidence of instability, as is evidence of fluid imbibing within the fragment (native effusion or positive contrast introduced at arthrography) and the remainder of the underlying bone. New bone forms over the defect, which may unite with the underlying bone; however, if subjected to repetitive forces (e.g., if the condition is not recognized or immobilization is inadequate), unstable fragments develop, which do not unite. Fragments may, of course, be unstable de novo.

When the lesion occurs at the capitellum (in younger patients with a short duration of symptoms, prior to physeal closure), localized subchondral bone flattening without fragmentation is occasionally seen. Subsequent new bone formation and fragment reunification are seen with adequate immobilization in this group.

In the talar dome, a history of forced inversion and dorsiflexion is noted to produce a lateral lesion (40% of cases), whereby the lateral margin of the talar dome is forced against the fibular styloid. These lesions are typically found in the mid to anterior portion of the talar dome.

Figures 77E Sagittal T1-weighted image after intra-articular gadolinium shows thickening and sclerosis of the femoral condylar subchondral cortex, gadolinium signal intensity deep to the cortex, and a clearly defined cyst within the underlying medullary bone. Ill-defined low signal intensity is demonstrated within the medullary bone surrounding the cyst, suggesting edema. 77F A coronal STIR image after intra-articular gadolinium shows the same osteochondral fragment as in 77E. The cortex is again seen to be thickened and sclerotic, the overlying cartilage is thinned, the condylar cortex is irregular, and fluid is seen imbibed deep to the osteochondral fragment. High signal intensity within the condyle is consistent with surrounding edema.

Figures 77G and 77H CT images (77G, transaxial acquisition; 77H, coronal reformat) show the typical appearance of a posteromedial talar osteochondral lesion, with a cup-shaped defect and a well-defined prominent sclerotic margin. Although this was an established lesion, no new bone formation is evident in the roof of the defect.

This is a painful, usually unilateral disease, typically occurring in adolescence (second and third decades, mean age 15), with males affected to a greater degree than females (2 to 3 times more frequently).

There is a history of trauma in up to 50% of cases, although the inciting event may not be recalled by the patient, and the condition may be labeled idiopathic.

Although usually painful, the condition may be asymptomatic or have vague, nonspecific complaints. There may be clicking, locking, and limiting of motion of the affected joint, and as the condition progresses, there may be progressive swelling with pain aggravated by movement.