In Figs. 9 and 10, the spinal angiographic correlation can be visualized in vivo with subtracted and unsubtracted views which demonstrate a radiculomedullary vessel giving rise to an anterior spinal artery. 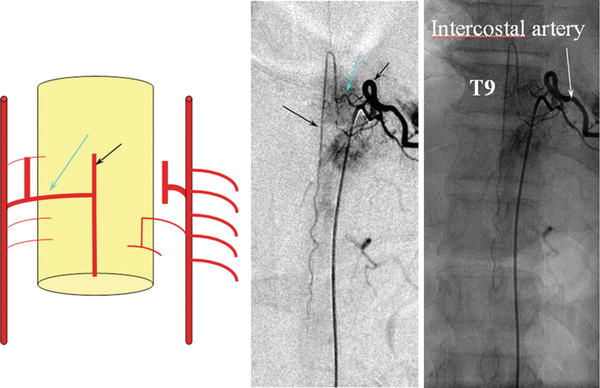 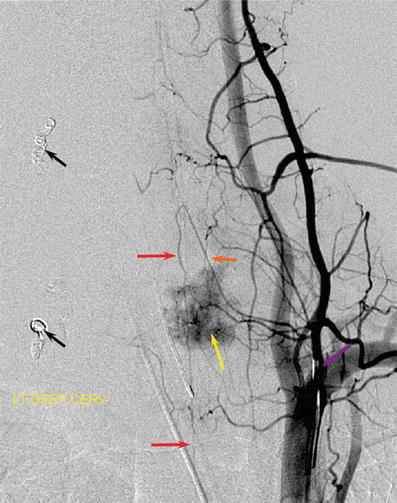 Frontal view from a spinal angiogram, subtracted view. Anterior spinal artery (red arrows) originating from a radiculomedullary branch (orange arrow) arising from the costocervical trunk (purple arrow). This conformation attests to the metameric nature of the system, where the spinal artery can arise from longitudinal vessels other than the vertebral artery. A tumor blush (yellow arrow) from T1 hepatoma metastasis is present, along with several coil masses (black arrows) deposited after embolization of the left-sided tumor soft tissue component

The Brain: From Fishes to Humans

When thinking about the brain neuroembryology and neurophylogeny, it is useful to conceptualize its structure as a complex spinal cord, supplied by segmental vessels. Once, together with higher organism complexity, more complicated anatomical structures are added on, we will see a more sophisticated vasculature pattern that is better understood keeping in mind the very simple basic segmental arrangement of the spinal cord. We can think of the developing brain as a progressively enlarging segment of the cord, requiring larger surface and deep perforator vessels as key to understanding evolution and vascular variations. The fact that newly formed vessels are the exception, while existing pathways are usually utilized and enlarged to accommodate tissue needs, was recognized since the early twentieth century.

The earliest vertebrates still existing today are the jawless fishes, cyclostomes, and hagfish. The brains of these animals possess all of the features of vertebrates, including five divisions of the brain: medulla, pons, midbrain, diencephalon, and telencephalon (Fig. 11). Even though some earlier fishes lack a cerebellum (lampreys and hagfish), its presence becomes a regular factor in later fish evolution. Other than a primitive cerebellum, in fishes we see a small but effective olfactory lobe and a primitive three-layer cortex, the forerunner of the hippocampus. The “higher center” of movement is controlled by what will eventually become the present-day basal ganglia (Fig. 11). The spinal cord will remain essentially unchanged, supplied by segmental radiculomedullary arteries. The vertebral arteries form as a result of longitudinal anastomoses between metameric branches of the cervical somites (Fig. 12).

Fig. 12
In the brain two large longitudinal vessels – the carotids – travel up to the neck and enter the cranial cavity, in a way similar to that of segmental radiculomedullary vessels in the cord (Fig. 12). Inside the skull, the internal carotid artery gives rise to paired longitudinal arteries: one that goes up, the “cranial ramus,” and one extending caudally, the “caudal ramus” (Fig. 12). The “cranial ramus” is the forerunner of the anterior cerebral and middle cerebral arteries. The caudal ramus is the forerunner of the PComm and of a small part of the basilar artery, which, at this point, is already fused at midline. At this point of development, a functionally significant anastomosis between the caudal ramus and the posterior circulation system is not activated yet, and the entire intracranial CNS (including the brainstem and the cerebellum) is supplied by the carotids.
The cranial ramus has two notable branches: the medial olfactory branch, which is the future ACA, and the lateral olfactory branch, which is the forerunner of the Heubner and of the anterior choroidal artery. The caudal ramus gives off a tectal artery which supplies the posterosuperior aspect of the midbrain; from this vessel comes off a cerebellar artery supplying the primitive cerebellum – forerunner of the superior cerebellar artery.
Segmental anastomoses also exist, usually in very small form, between the carotid and vertebral systems. In the human embryo, these pathways are quite functional at early stages while they regress as the vertebrobasilar system. Occasional persistence of these channels leads to the presence of anomalous vessels such as the persistent trigeminal artery, the persistent hypoglossal artery, or the proatlantal arteries, depending on the segment that failed to develop.

The changes seen with the shift to amphibians are schematized in Fig. 13. The brain continues to grow, with a larger primitive hippocampus and larger basal ganglia. This larger size of the brain leads to enlargement of the supplying, already existing branches and to the fusion of smaller feeders into larger arteries (Fig. 13). The lateral olfactory branch has enlarged with additional named vessels and now consists of two main branches – the lateral striate artery, forerunner of the Heubner, of the Middle cerebral artery (MCA), and of the MCA perforators, and the “posterior telencephalic branch,” forerunner of the anterior choroidal artery (Fig. 13). On the caudal ramus, the tectal/cerebellar complex assumes supply of a developing choroid plexus with a posterior choroidal branch. The anastomosis with the posterior circulation is still absent in these animals.

The changes seen with the shift from amphibians to reptiles are schematized in Fig. 14. From the lateral striate (Heubner forerunner) branch of the cranial ramus arise multiple “perforators” supplying the cerebral hemispheres (Fig. 14). These multiple perforators will eventually become the MCA. We understand now the concept that the very large human MCA is a relatively late phylogenetical acquisition and represents a hypertrophied perforator branch of the anterior cerebral artery (Fig. 14). From another perspective we can also understand how the MCA can be embryologically and phylogenetically considered a branch of the ACA.

Fig. 14
The “posterior telencephalic branch” of the ICA, forerunner of the anterior choroidal, supplies the posterior telencephalic structures and is connected anteriorly with the olfactory artery; this function will continue to be fulfilled until very late in mammals’ evolution, when the posterior brain territory will be annexed by the “posterior cerebral artery.” Other important steps in reptiles are the formation of an anterior anastomosis between the medial olfactory arteries, which is the future Acomm, and the enlargement of the cerebellum, particularly of the more caudal vermis, which is supplied by the distal “basilar” system.

In the birds a discrete MCA emerges as a dominant perforator from among a collection of lateral striate vessels, driven by rapidly enlarging cortical volume (Fig. 15). The posterior cerebral artery (PCA) of birds, which is in fact the anterior choroidal, continues as the dominant parieto-occipital supply source, while the tectal artery (which is the real PCA) extends its coverage and forms a functional anastomosis with the anterior choroidal system, setting the ground for future annexation of its territory (Fig. 15). This large telencephalic territory of the anterior choroidal will be lost at the early stages of embryogenesis. In the birds, the vertebral system remains confined to the cord or in some cases lower medulla/vermian region (Fig. 15).

The biggest change in mammals regards the development of the caudal ramus, since the enlargement of the cerebellum and of the posterior telencephalon place increasing demand on the carotid system. Notwithstanding, also in some mammals such as the sheep, the vertebral system does not contribute to brain supply, and the basilar artery is continuing to demonstrate craniopetal flow from the internal cerebral system. However, in higher mammals the carotid system appears to reach its functional limit, leading to progressive annexation of the brainstem and cerebellar territory by the vertebrobasilar system (Fig. 16). At first, this is confined to the PICA region. Progressively, however, the vertebral artery annexes portions of basilar territory, resulting in reversal of craniopetal basilar flow to the craniofugal form observed in monkeys, apes, and humans (Figs. 16 and 17).

Fig. 17
The phylogenetically novel participation of the vertebral system in brain supply is maximized in the human, where the posterior cerebral artery, previously known as the tectal artery in the “lower” species, is now functionally acquired by the posterior circulation, even though developmentally it belongs to the carotids (Fig. 17). Even as such, frequent occurrence of “fetal” Pcomm disposition attests to this relatively recent phylogenetic acquisition (see embryology section). Recent territory shifts in this region are borne out by marked variability in PICA-AICA dominance, whereas the phylogenetically older superior cerebellar arteries are much less variable.

At about 4 weeks of gestation, the neural plate has just closed, and the brain is a tube with a central canal of fluid, similar to the spinal cord. A series of small vessels wrap around the brain and nourish it by simple diffusion in a similar way to that of the spinal cord (Fig. 18).

Fig. 18
The way the vessels are arranged, i.e., transverse vessels connected by longitudinal ones (Fig. 18), is called metameric, because they ultimately relate to the metamers, somites, segments, levels, etc., that are the basic building blocks of our anatomy, similar to the arrangement found in the lower species.
The early arrangement centers on the six aortic arches, which relate to the branchial arches (Fig. 19). The aortic arches consist of the dorsal and ventral aortae, connected by longitudinal anastomoses – the arches themselves. There are a few adult arrangements which are almost constant:

There is a large vessel arising from the fourth aortic arch (Fig. 21). Keeping in mind that this is a simplification, we will call it the common carotid. The place of origin of the internal carotid is shown, but again the external carotid is not displayed. The carotid system appears to feed the entire brain, which is in fact true of the early human embryology; the posterior circulation does not exist yet. From this carotid vessel, a series of small arteries wrap around the brain and nourish it by simple diffusion (Fig. 21).

Fig. 21
Only gold members can continue reading. Log In or Register to continue