The size of clear cell carcinomas ranges up to 30 cm with a mean of about 13–15 cm [2]. Although they may be solid, more commonly the cut surface reveal a thick-walled unilocular cyst with multiple yellow-beige fleshy nodules protruding into the lumen or a multilocular mass with locules containing watery or mucinous fluid. Most tumor arise in endometriosis and display features of an endometriotic cyst which typically contains chocolate-brown fluid, and thickened polypoid or nodular area in the wall, or a larger solid area reflecting the focus of malignant transformation [2].

In the literature, sonographic characteristics of clear cell carcinomas are usually described together with the other more common “epithelial malignant tumors,” and a separate analysis of this type of malignancy has not usually reported. In Valentin’s paper [11], for instance, 11 cases with clear cells carcinomas were included, but no detailed assessment was made in this subgroup of cancers.
Only recently, a paper by Alcazar et al. [1] reported the ultrasound features of 16 cases of clear cell carcinomas.
According to the morphology at grayscale evaluation, 13 (81 %) of 16 tumors were unilocular/multilocular-solid, one (6 %) tumor was unilocular, and two (13 %) were solid. Median size was 231 ml (range 9–2,432). All tumors but one were vascularized at color Doppler, with moderate and rich vascularization in 13 (81 %) cases.
In a study aimed at comparing the sonographic patterns of borderline tumors and primary ovarian cancers arising in endometrioid cysts versus sonographic features of benign endometriotic cysts, six cases of clear cell carcinoma arising in endometriotic cysts have been collected (five cases were FIGO stage I and one case FIGO stage II disease). All cases were characterized by the presence of solid tissue, vascularized at color Doppler examination [12].
Ultrasound images of clear cell carcinoma are shown in Figs. 1, 2, and 3. 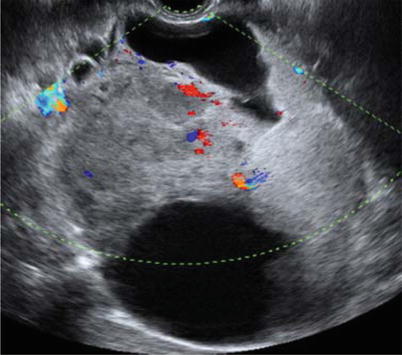 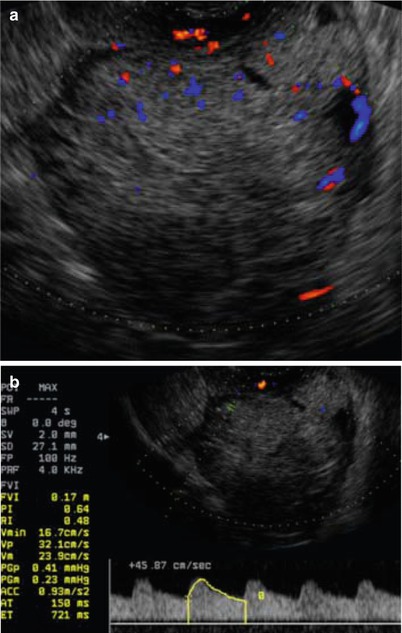 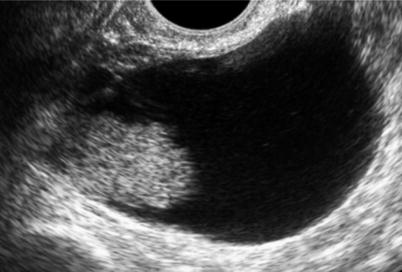 Ultrasound image of a clear cell carcinoma in a 48-year-old woman showing a unilocular-solid mass. The internal cyst wall is irregular with a large protruding solid component

Transitional cells tumors comprise 10 % of ovarian epithelial tumors. The transitional epithelial cell type, characterized by a relatively uniform population of stratified cells with ovoid nuclei displaying nuclear grooves, is named because of its resemblance to urothelium [2].
Two clinicopathologic types of malignant transitional cell tumor have been described: malignant Brenner tumor, in which a benign or atypical proliferative (borderline) Brenner component is identified within or contiguous with the tumor, and transitional cells carcinomas (TCC), in which no benign or borderline Brenner is identified [13].
The histologic patterns of TCC are often mixed with other types of carcinoma, most often serous. Approximately 10 % of ovarian carcinomas containing the TCC pattern are said to be pure. More than 50 % of the tumor should display the pattern of TCC for a diagnosis of TCC. In addition to not having a benign Brenner tumor component, TCC lacks the prominent stromal calcification [14–16].
Since TCC of the ovary has marked morphological similarities to TCC of the bladder and it behaves more aggressive than malignant Brenner tumors, Austin and Norris [14] concluded that ovarian TCC arises directly from the pluripotent surface epithelium of the ovary and from cells with urothelial potential, rather than from a benign or proliferative Brenner tumor precursor.
Eichhorn and Young provided a detailed description of ovarian TCC [17], which typically displays undulating, diffuse, insular, and trabecular growth patterns. The tumor cell nuclei are oblong or round, often exhibiting nucleoli with longitudinal patterns. The cytoplasm is often pale and granular and is rarely clear or eosinophilic.
Malignant Brenner tumors occur at a mean age of 63 years, while TCCs present at a mean age of 56 years.
Almost all Brenner tumors are asymptomatic and discovered by chance, for example, at the time of imaging for an unrelated indication or at surgery [13, 17–22]. Among patients who are symptomatic, vaginal bleeding (explained by estrogenic activity) [13, 19, 23–25], pelvic pain, or the presence of a palpable pelvic mass are frequently reported [24, 25]. Patients may also present with urinary retention [15], ascites [1], or Meigs’ syndrome [2]. The common presenting symptoms of TCC of the ovary are abdominal pain, abdominal swelling or distension, and weight loss. Occasionally, the patient may present with uterine bleeding, back pain, and bowel or urinary symptoms. However, the clinical presentation is not discernible from other types of ovarian carcinoma [14, 17].
CA125 is clinically useful as a serum marker of advanced stages, tumor progression, and recurrence, although early stages may be CA125-negative.
The stage distribution of malignant Brenner tumor is as follows: stage I, 64 %; stage II, 12 %; stage III, 18 %; and stage IV, 6 %. In contrast, 53 % of TCCs present in advanced stage [2].
Ovarian TCC is clinically different from malignant Brenner tumor.
TCC presents in advanced stages, while most malignant Brenner tumors present in stage I. TCC is a variant of high-grade serous carcinoma and thus is a type II tumor. In contrast, malignant Brenner tumor has features of a type I tumor [2].
Only gold members can continue reading. Log In or Register to continue