Granulosa cell tumor with peritoneal dissemination in an 80-year-old woman. (a) Axial T2-weighted images shows a cystic mass (arrow) containing a fluid-fluid level, reflecting intratumoral hemorrhage. There is a peritoneal implant in a cul-de-sac (arrowhead). The uterus (asterisk) is markedly enlarged for this age of the patient, and the cervix contains aggregated Nabothian cysts. (b) Sagittal T2-weighted image shows a large mass containing an irregular-shaped cyst of high intensity. (c) Sagittal T-weighted image also shows increased intensity in the cyst (asterisk), suggestive of hemorrhagic nature of the fluid

In SLCTs, the most important prognostic factors in these tumors are their stage and degree of differentiation [13]. Although all well-differentiated SLCTs behave as benign, 11 % of tumors with intermediate differentiation, 59 % of tumors with poor differentiation are malignant [13–15]. Poorly differentiated SLCTs tend to contain areas of hemorrhage and necrosis more frequently, compared to well-differentiated tumor [16].
The recurrent sex cord-stromal tumors are usually peritoneal seeding as nodules or infiltrative masses on the peritoneal surface, most commonly in the pelvic cavity or around the liver or undersurface of diaphragm (Fig. 2). Occasionally, recurrent tumor may also be encountered in the retroperitoneum (Fig. 3). The tumors may show variable imaging appearances from thin-walled cystic masses to solid masses (Fig. 2) [17]. The cystic mass may be accompanied by a fluid-fluid level, reflecting intratumoral hemorrhage (Fig. 3). Although nodal involvement at the time of primary surgery is extremely low, nodal involvement at the time of recurrence has been documented in 5 % of cases [18]. However, different from nodal metastases in ovarian carcinomas, the number of nodal involvement is usually limited. In cases of recurrent GCTs, omental or mesenteric infiltration and a large amount of ascites is quite unusual, unlike more common ovarian carcinomas of epithelial type [17]. 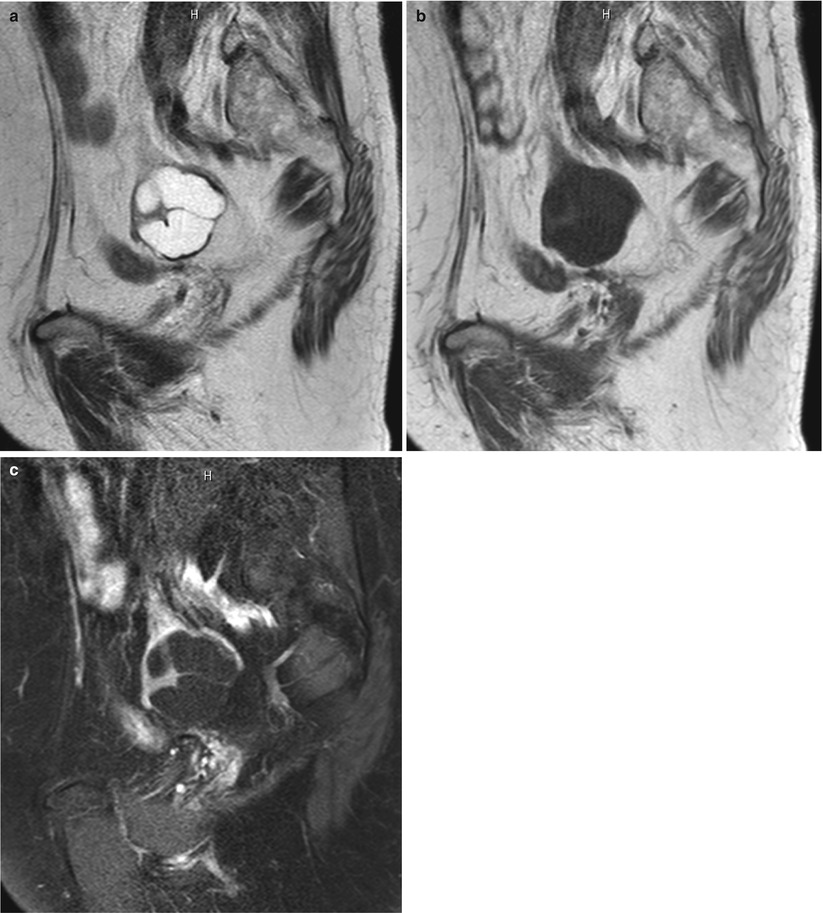 Recurrent granulosa cell tumor in a 79-year-old woman. The patient has a past history of unilateral salpingo-oohorectomy and hysterectomy for granulosa cell tumor of the contralateral ovary in approximately 30 years ago. (a) Sagittal T2-weighted image shows a predominantly cystic mass in the left ovary. (b) T1-weighted image shows low intensity of the cyst content. (c) Post-contrast T1-weighted images with fat suppression shows enhancement in the septi and wall of the cystic mass 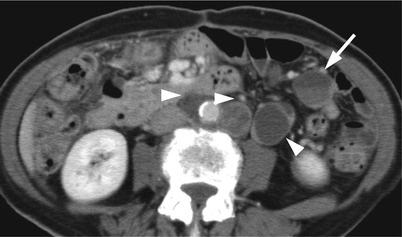 Recurrent granulosa cell tumor in a 70-year-old woman. She had history of granulosa cell tumor in 8 years before. Contrast-enhanced CT demonstrates multiple nodes of low intensity in the para-aortic region and retroperitoneum (arrowheads). There is another well-demarcated cystic mass in the mesenterium (arrow), which contains a fluid-fluid level suggestive of intratumoral hemorrhage
Acknowledgement
I would like to acknowledge Prof. M. Kataoka in Dept. of Diagnostic Radiology, Kyoto University, for her great help to find CT images and clinical information of patients with recurrent granulosa cell tumor.
References
1.
Stenwig JT, Hazekamp JT, Beecham JB. Granulosa cell tumors of the ovary. A clinicopathological study of 118 cases with long-term follow-up. Gynecol Oncol. 1979;7(2):136–52.PubMedCrossRef
Only gold members can continue reading. Log In or Register to continue